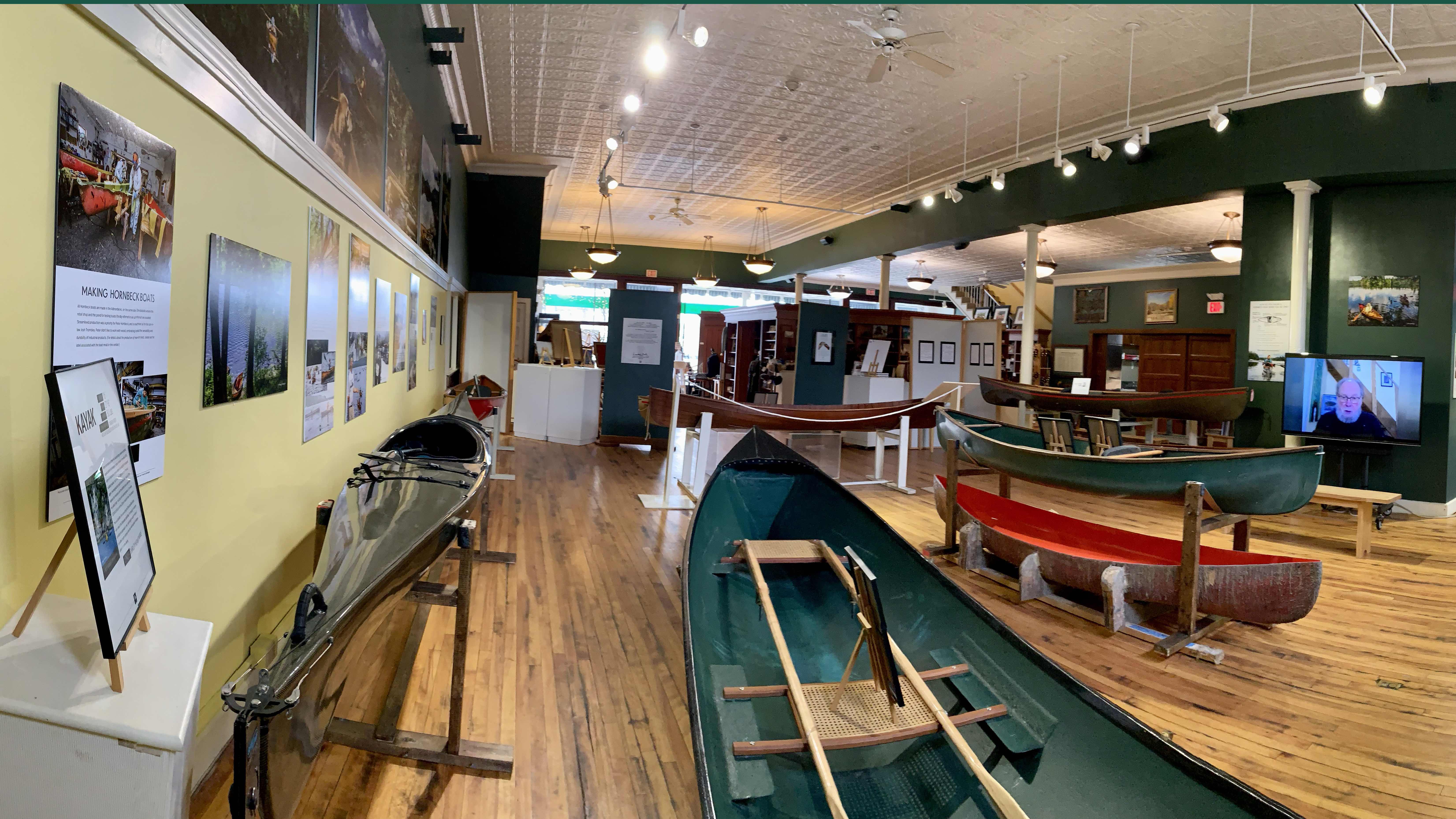 Canoes for All Ages and Sizes 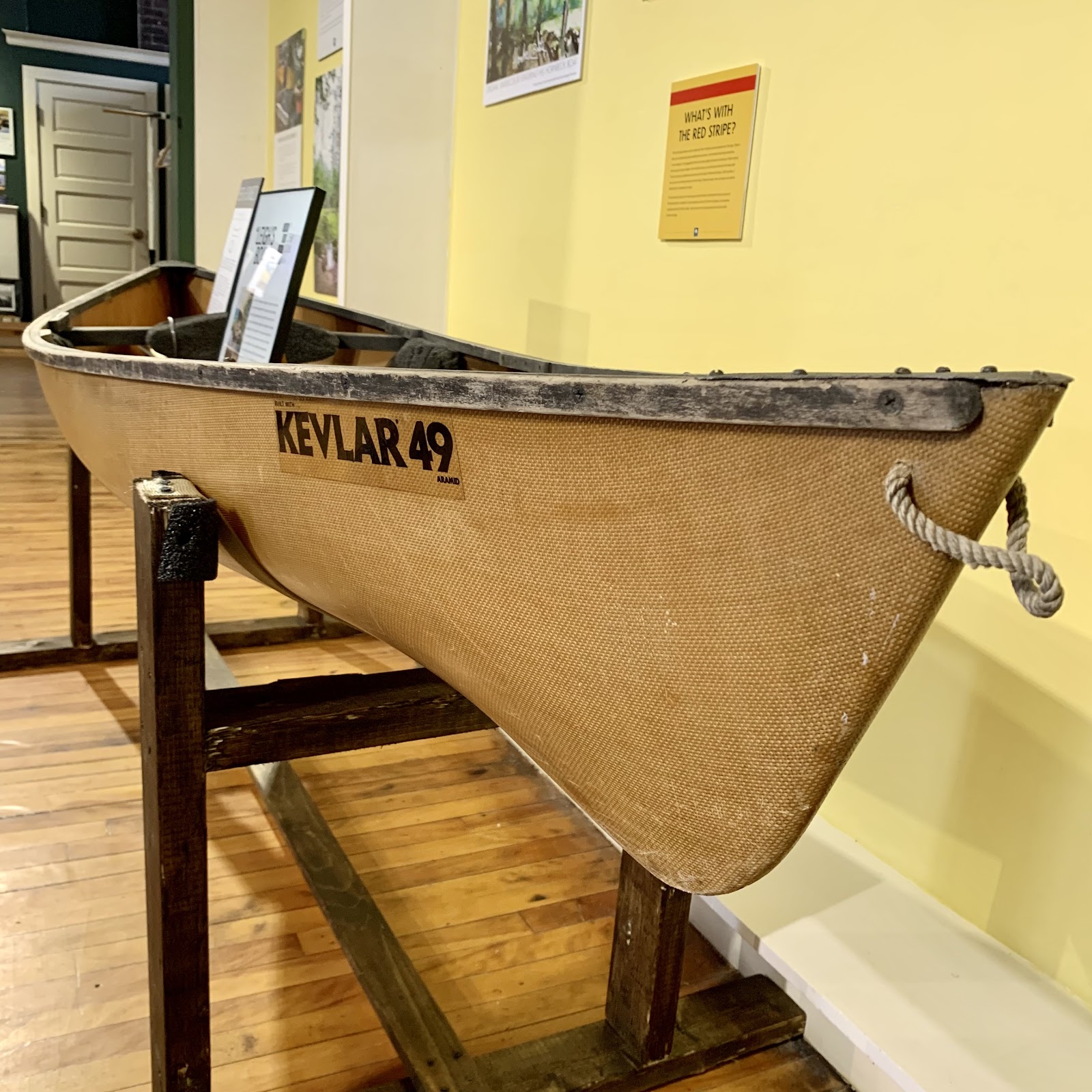 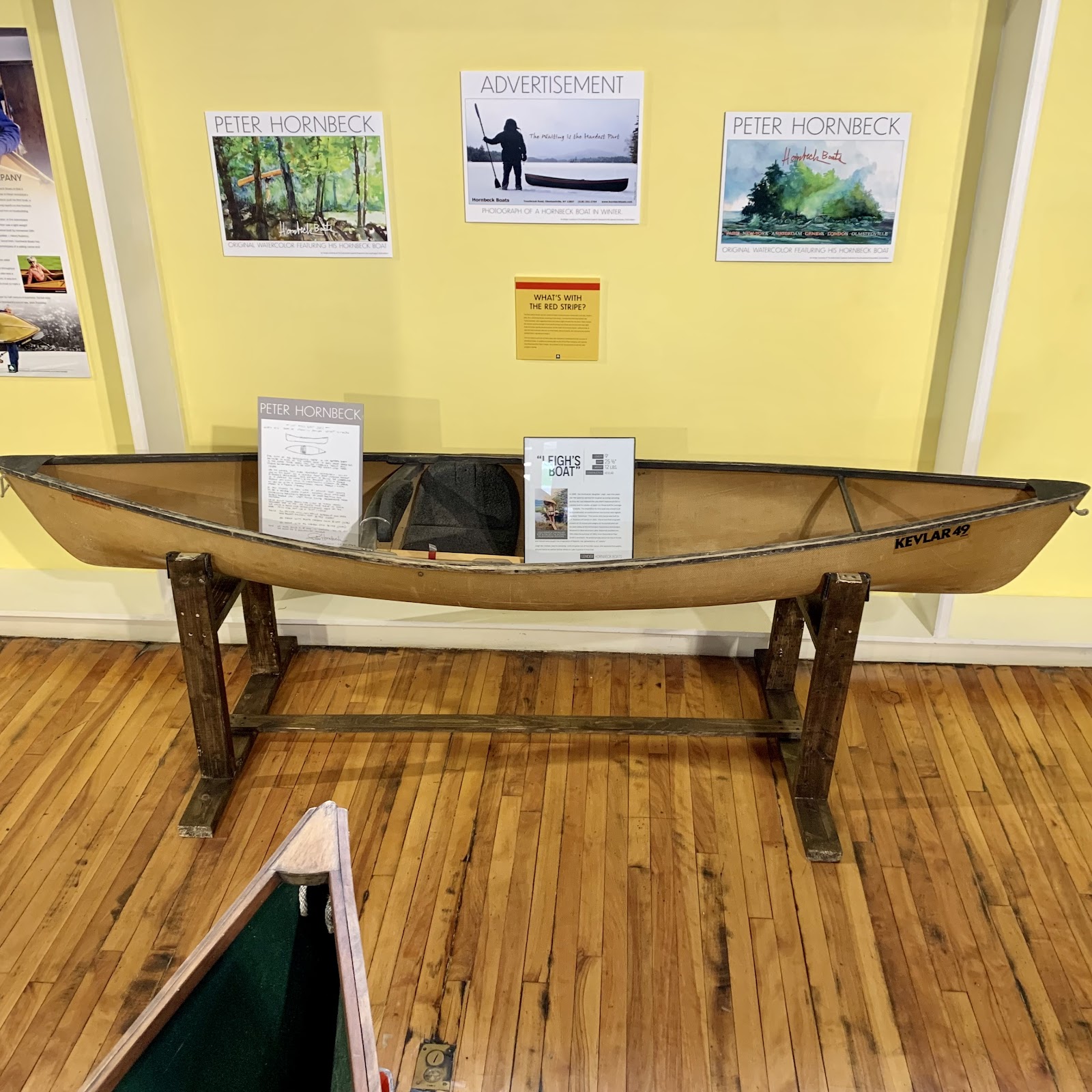 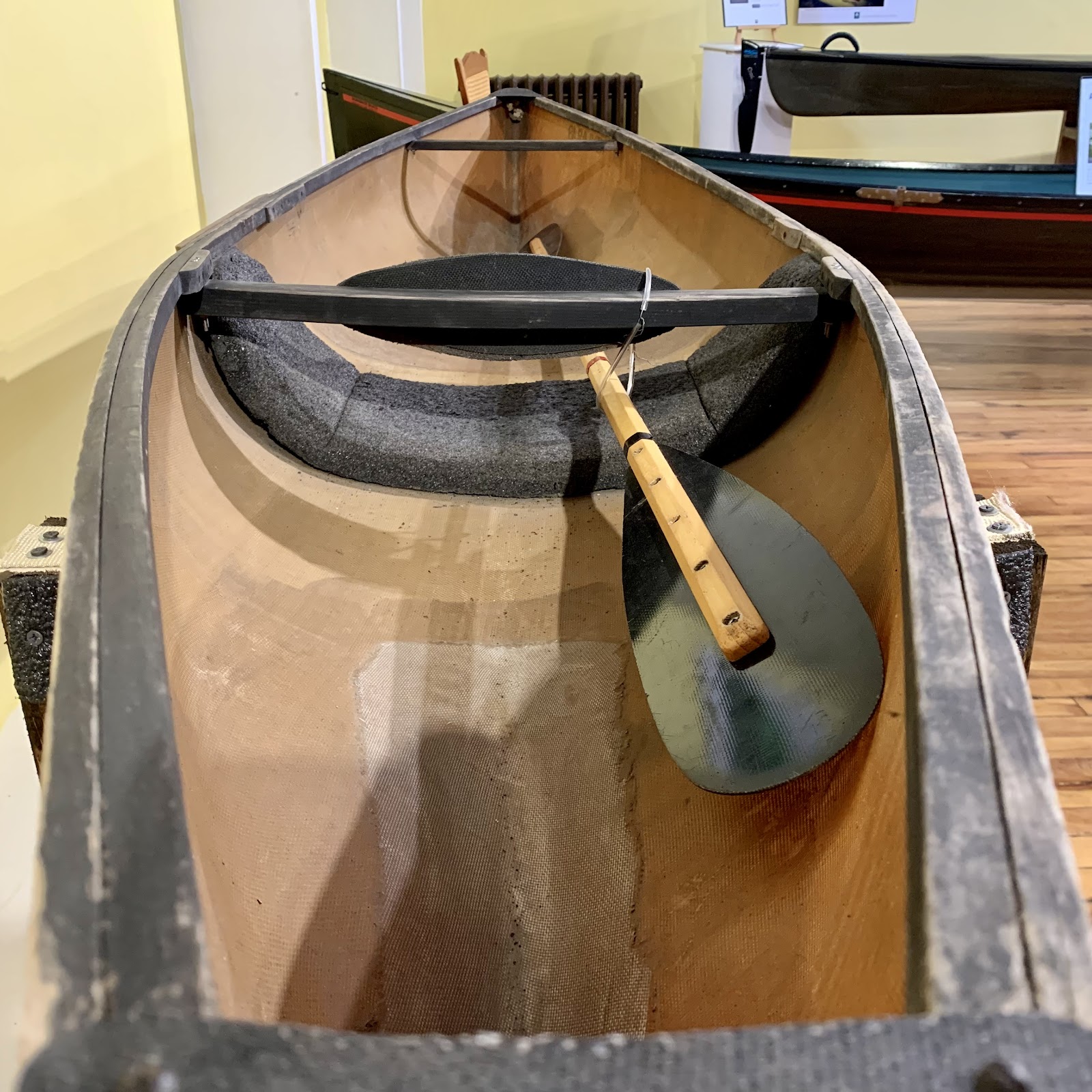 In 1985, the Hornbecks' daughter, Leigh, was nine years old. Her parents wanted her to grow up loving canoeing, as they did, but realized that she didn't have much fun in canoes built for adults-at least not those built for average sized adults. The inspiration for this boat was a boat built for a small adult, an outdoorsman and author who signed his work "Nessmuk."

The canoe Sairy Gamp was built by J.H. Rushton of Canton in 1882. She is nine feet long with a beam of 26 inches and weighs 10 ½ pounds and can be seen today at the Adirondack Experience (Adirondack Museum) in Blue Mountain Lake. Nessmuk paddled her 266 miles the summer of 1883, from Boonville to Paul Smith's and back. He wrote lyrically about his trip in Forest and Stream and caught the imagination of legions, nay, generations, of "outers."

Leigh did, indeed, take to canoeing. Until she grew out of the little canoe, she explored the waters around home as well as farther afield on Lake Superior in this boat. Leighs Boat on loan from Hornbeck Boats. 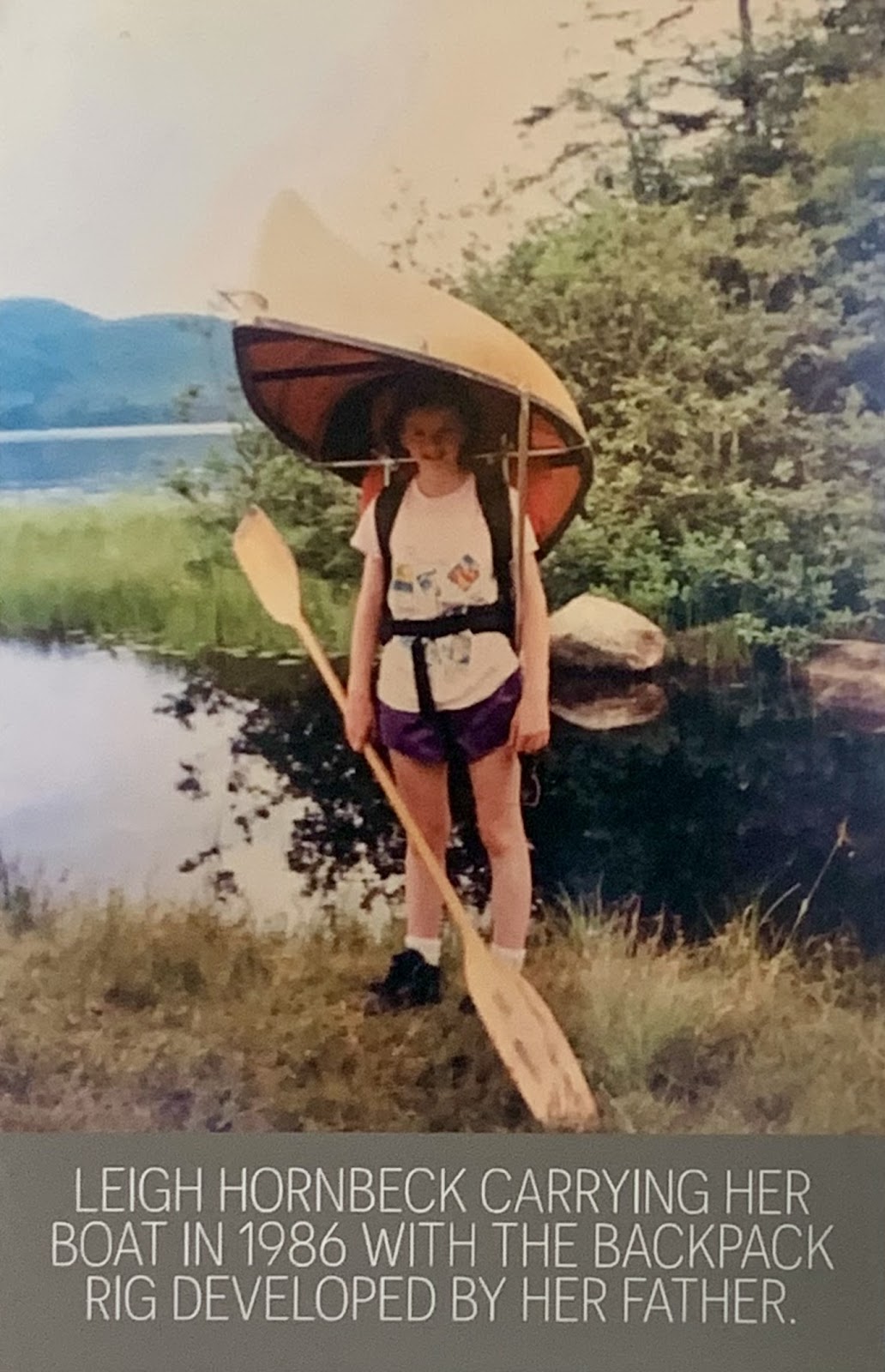 LEIGH HORNBECK CARRYING HER BOAT IN 1986 WITH THE BACKPACK RIG DEVELOPED BY HER FATHER.

This is a Wolfen. It is owned by Olmstedville native Shirley Hewitt Ware who uses it for flatwater paddling. Its stability in adverse conditions appeals to her, and its light weight makes it possible to go it alone when her avid kayaker husband doesn't come along. 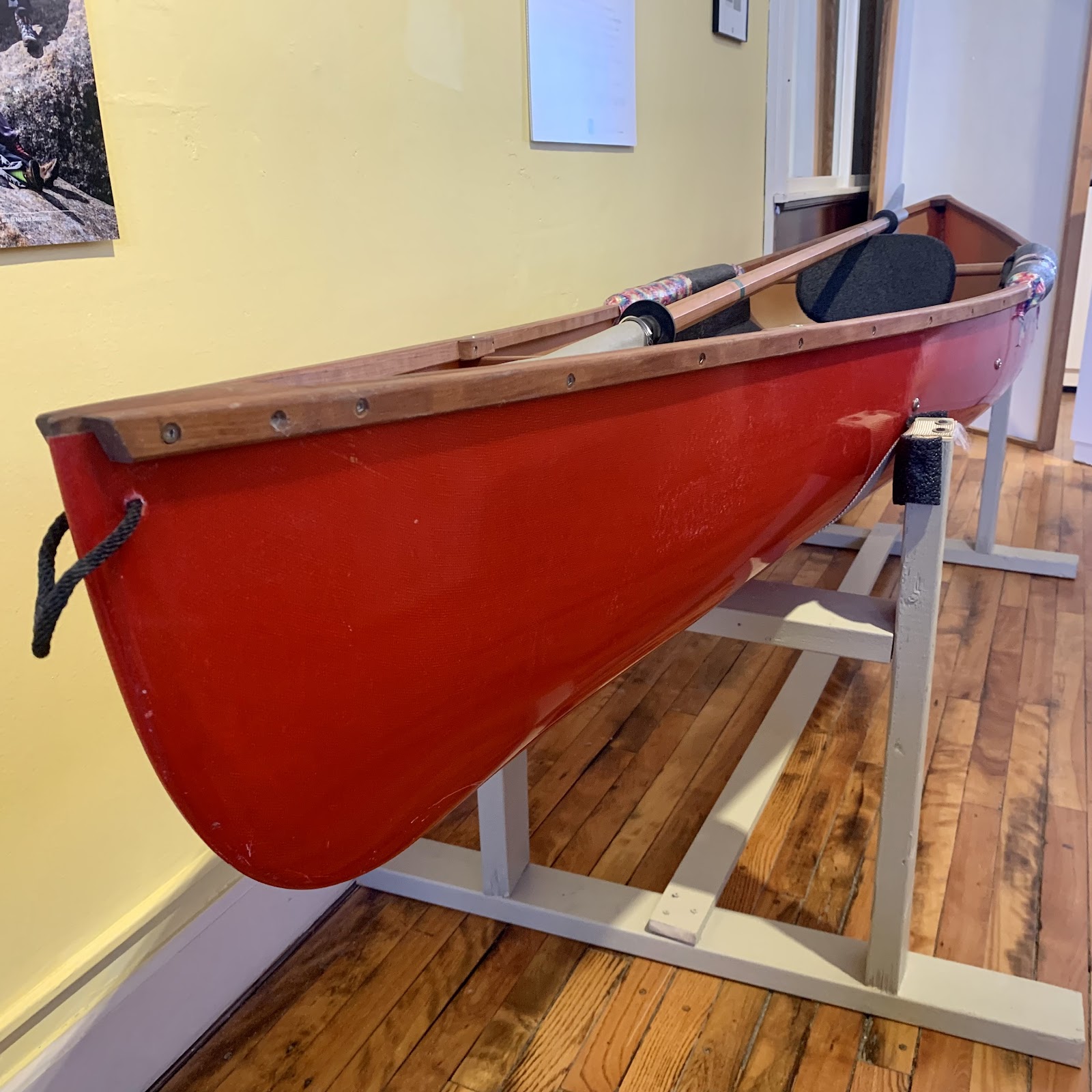 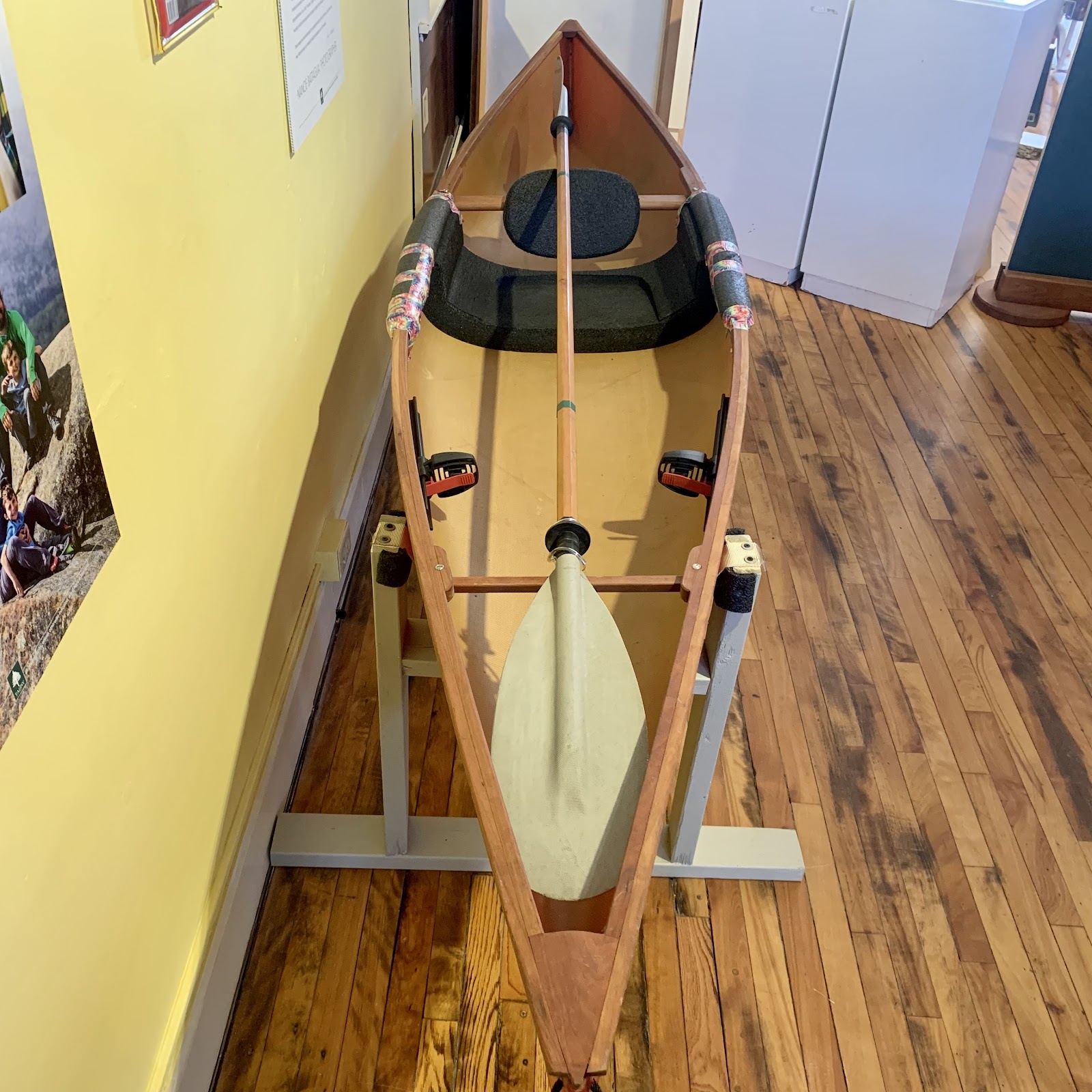 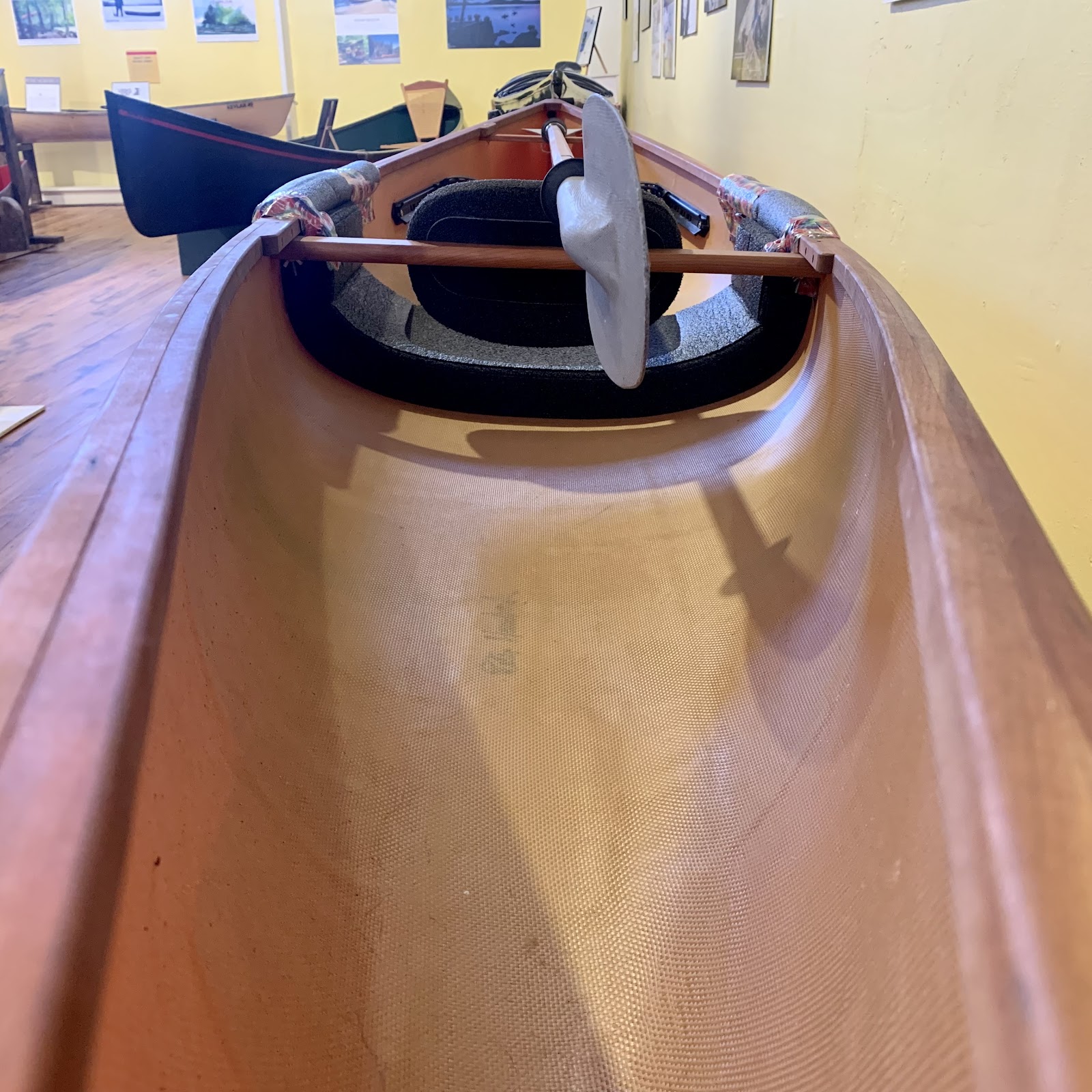 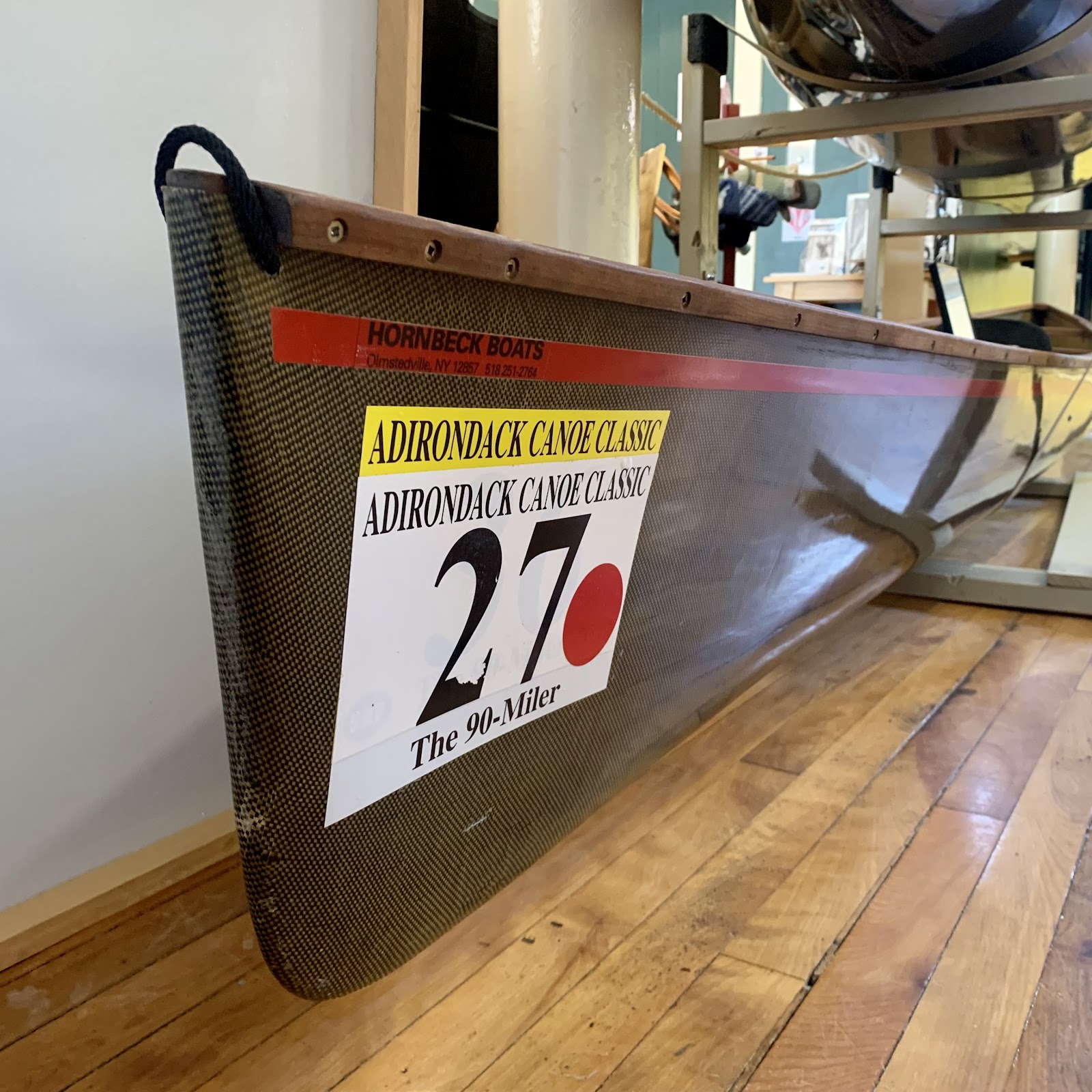 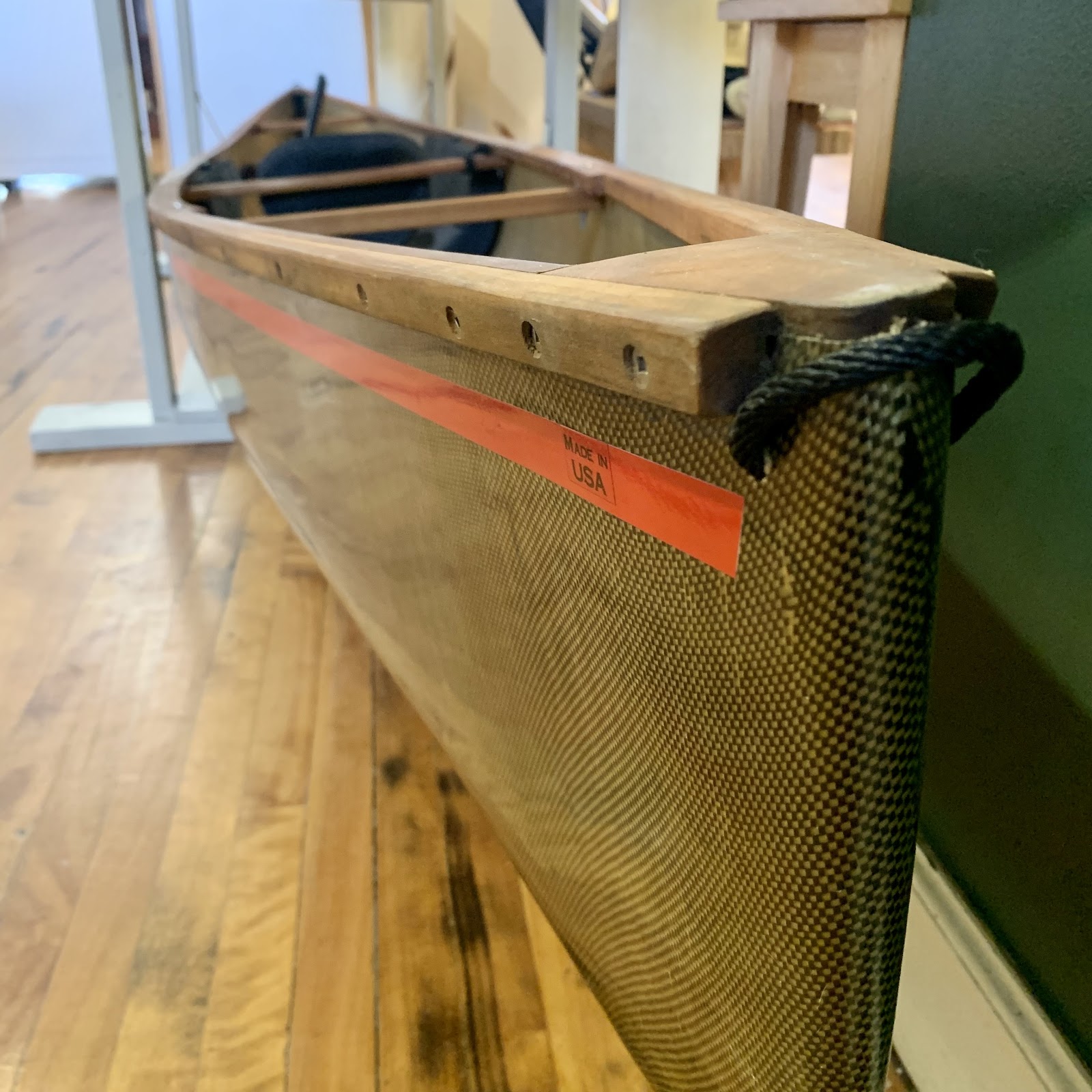 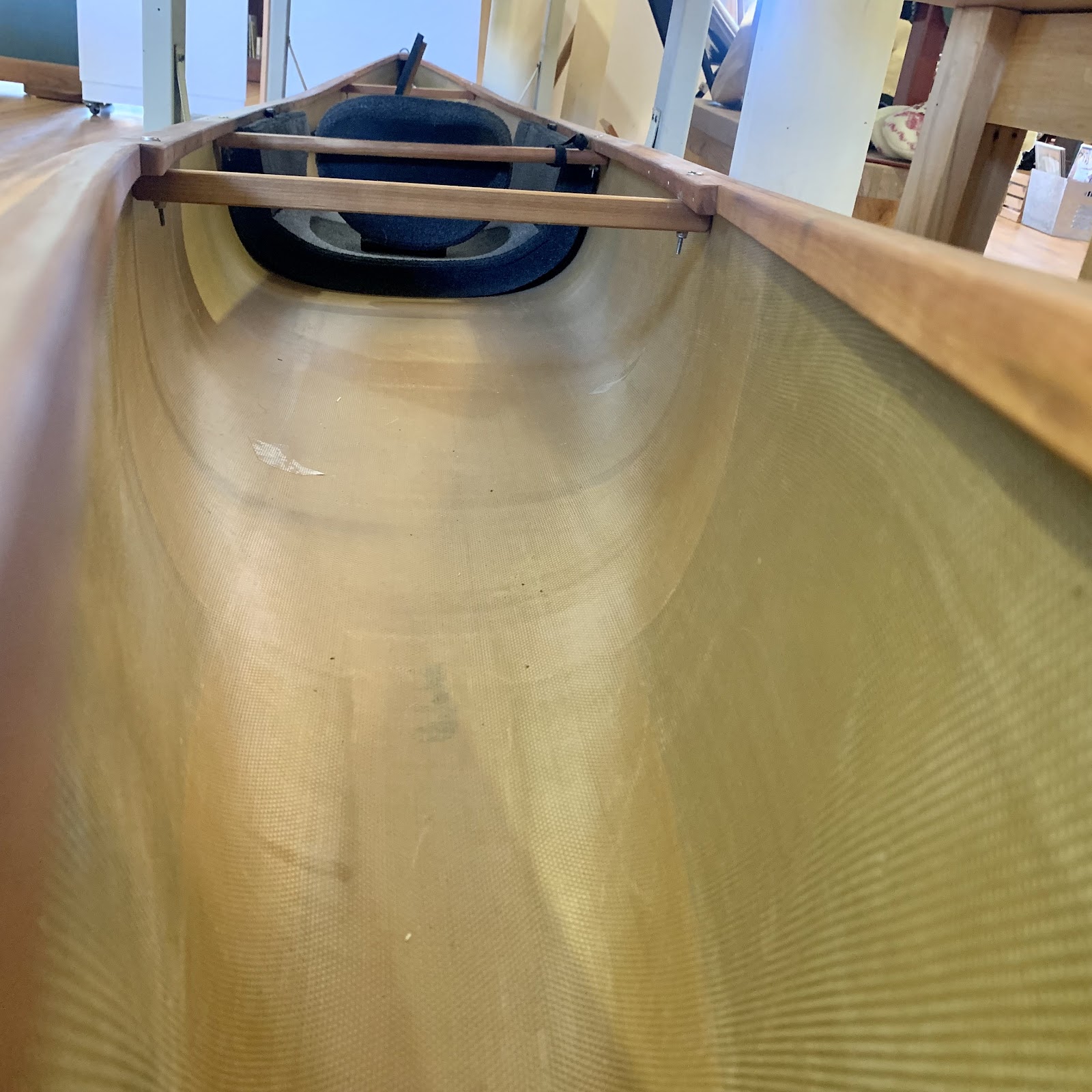 The reason the present Hornbeck boats come in just a few colors is due to the manufacturing method. There is not a colored gel coat in the mold, so the color of the boat is the color of the fabric, which is the outside layer. Plain Kevlar is gold, their Matrix (a mix of Kevlar and graphite) is greenish-gray.

Here, an original red New Trick sits at The TAUNY Centers exhibit Hornbeck Boats: Lightest Boats in the Deep Woods. Provided by photographer Nancie Battaglia, this red boat was an experiment, made with a red polyester fabric as the first layer, and a Kevlar hull built the normal way inside of it. From a production standpoint, this method was unsatisfactory, so no others were made like this.

Advancing the sleek New Trick design one step further ushered in the Fast Trick, an answer to Adirondack Racing events. Many paddlers have used Lost Pond canoes in the 90-mile Adirondack Classic canoe race since it began in 1983. Paddlers who really want to cover the course in the shortest time use a longer boat. A few years ago, Hornbeck developed a line of slimmer, longer canoes specifically for the Solo Recreation Class.

The Fast Trick canoes are further developments of Hornbeck's speedier boats, the "New Trick" line. He was known almost exclusively for his little canoes, and he wanted to prove that an old dog (himself) could indeed learn a new trick in canoe design. 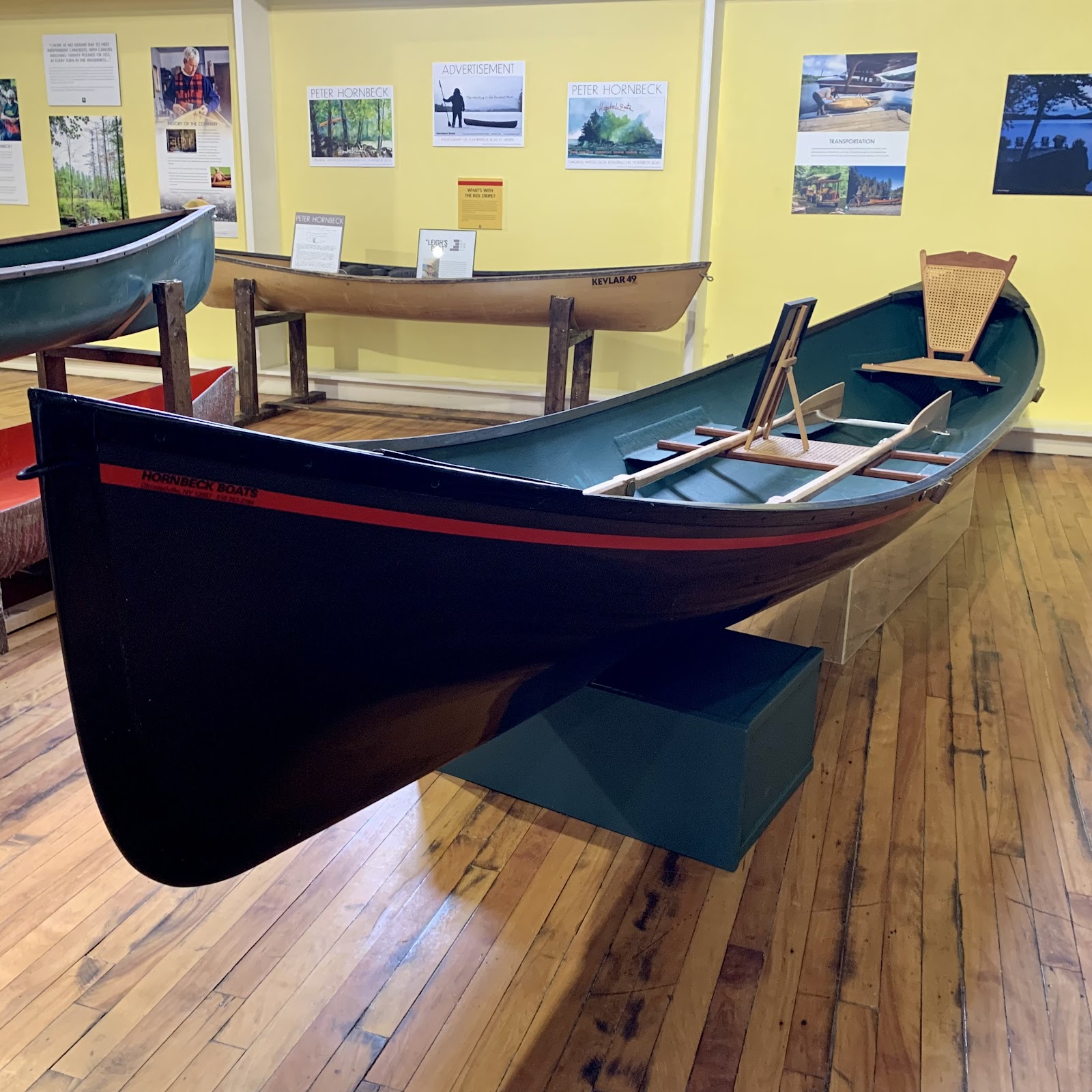 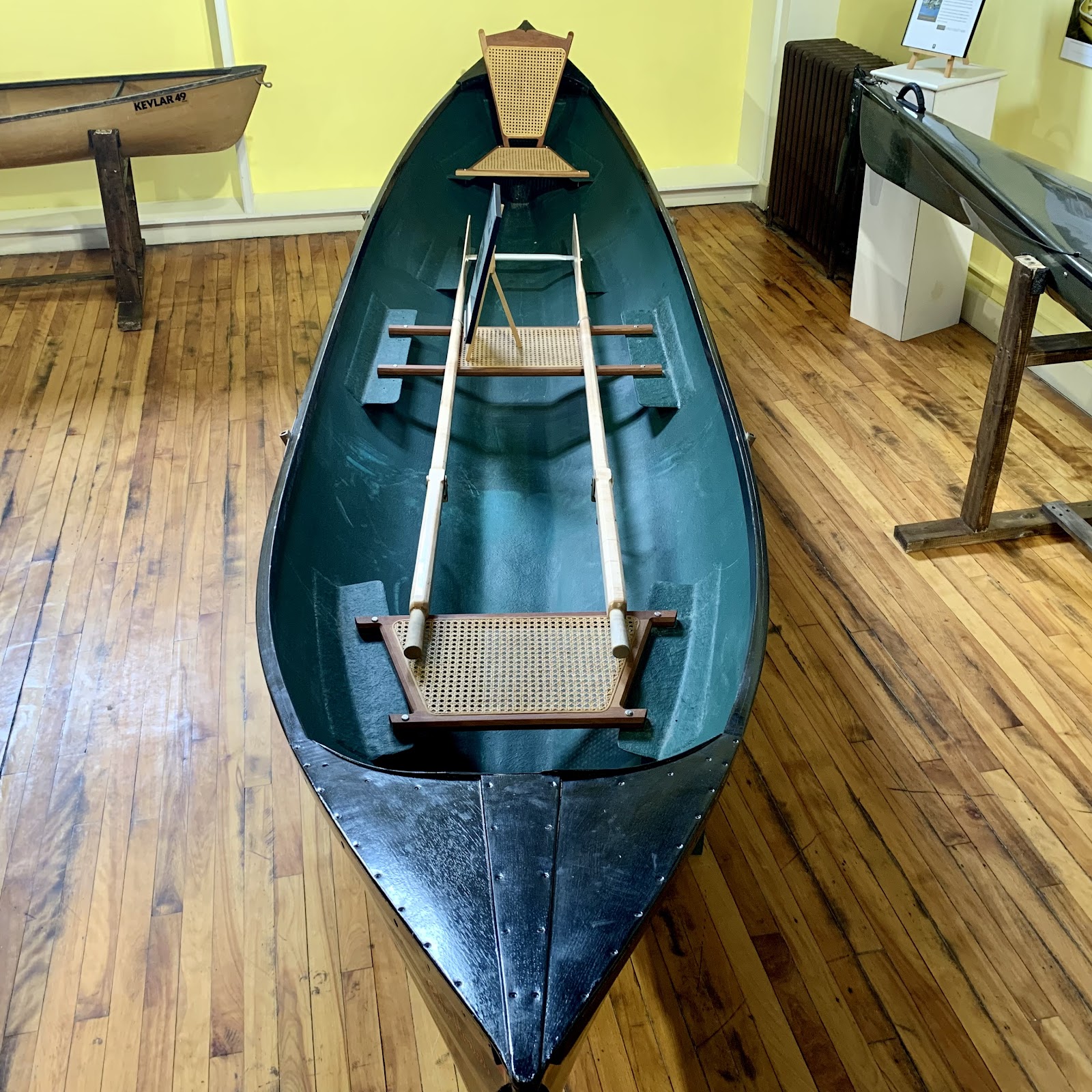 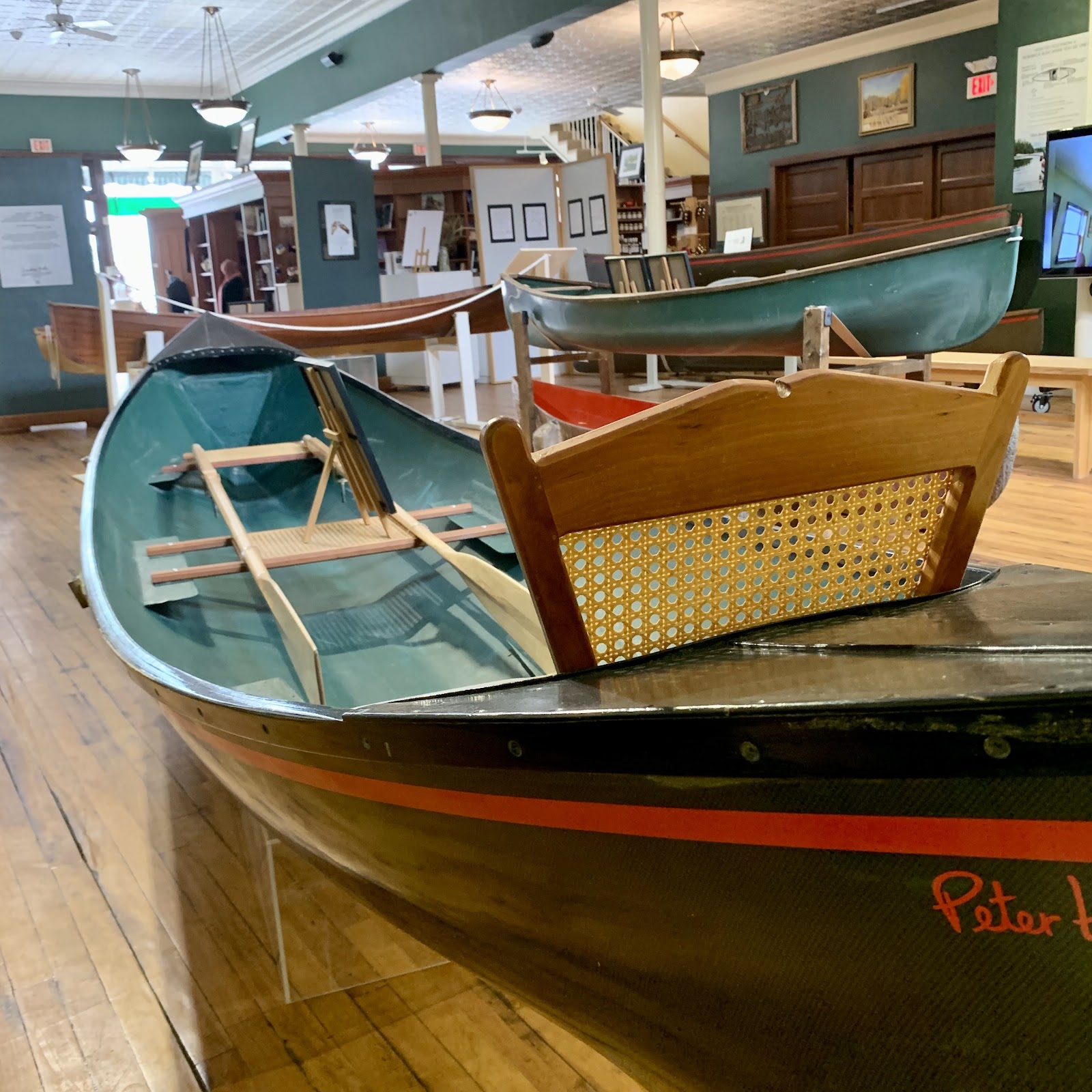 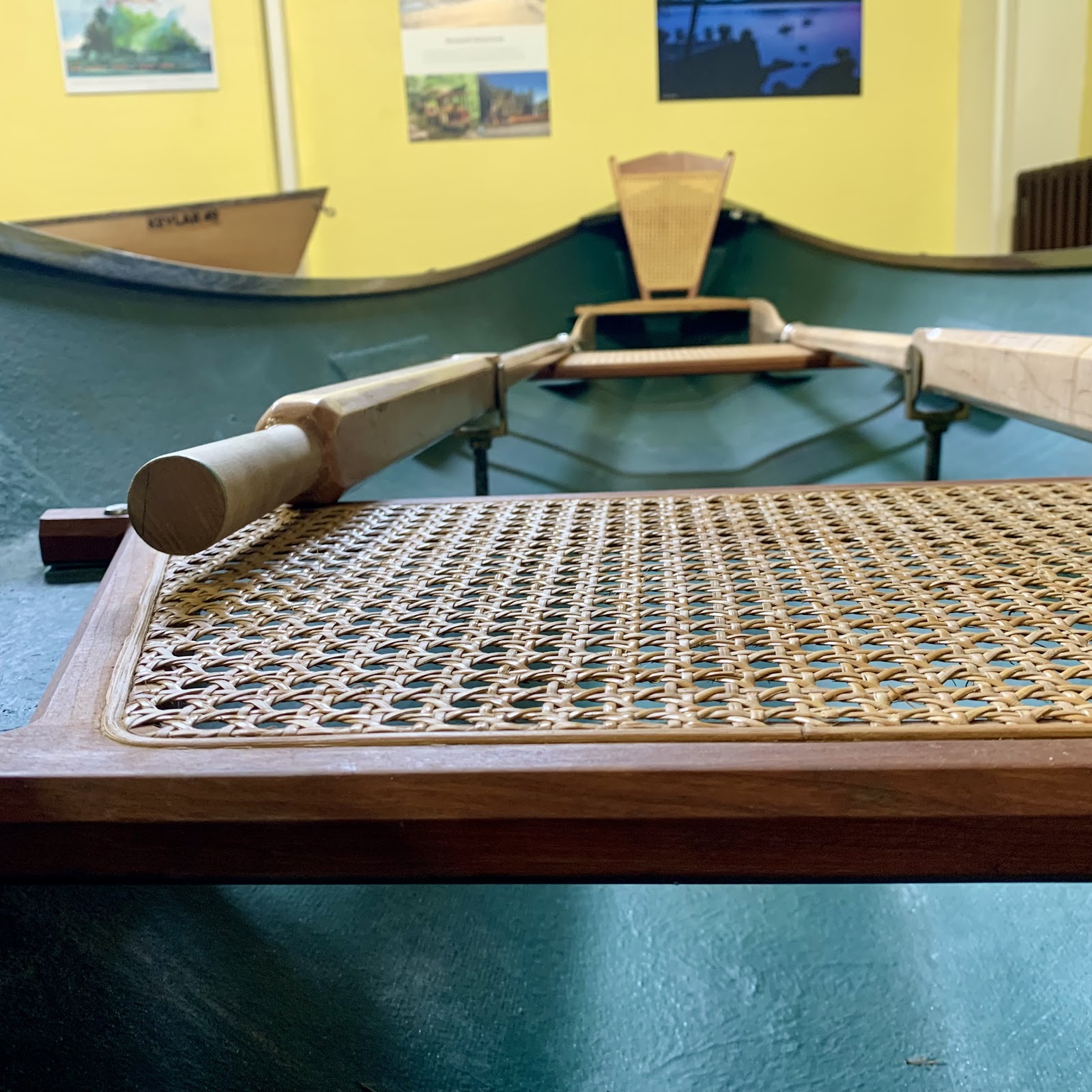 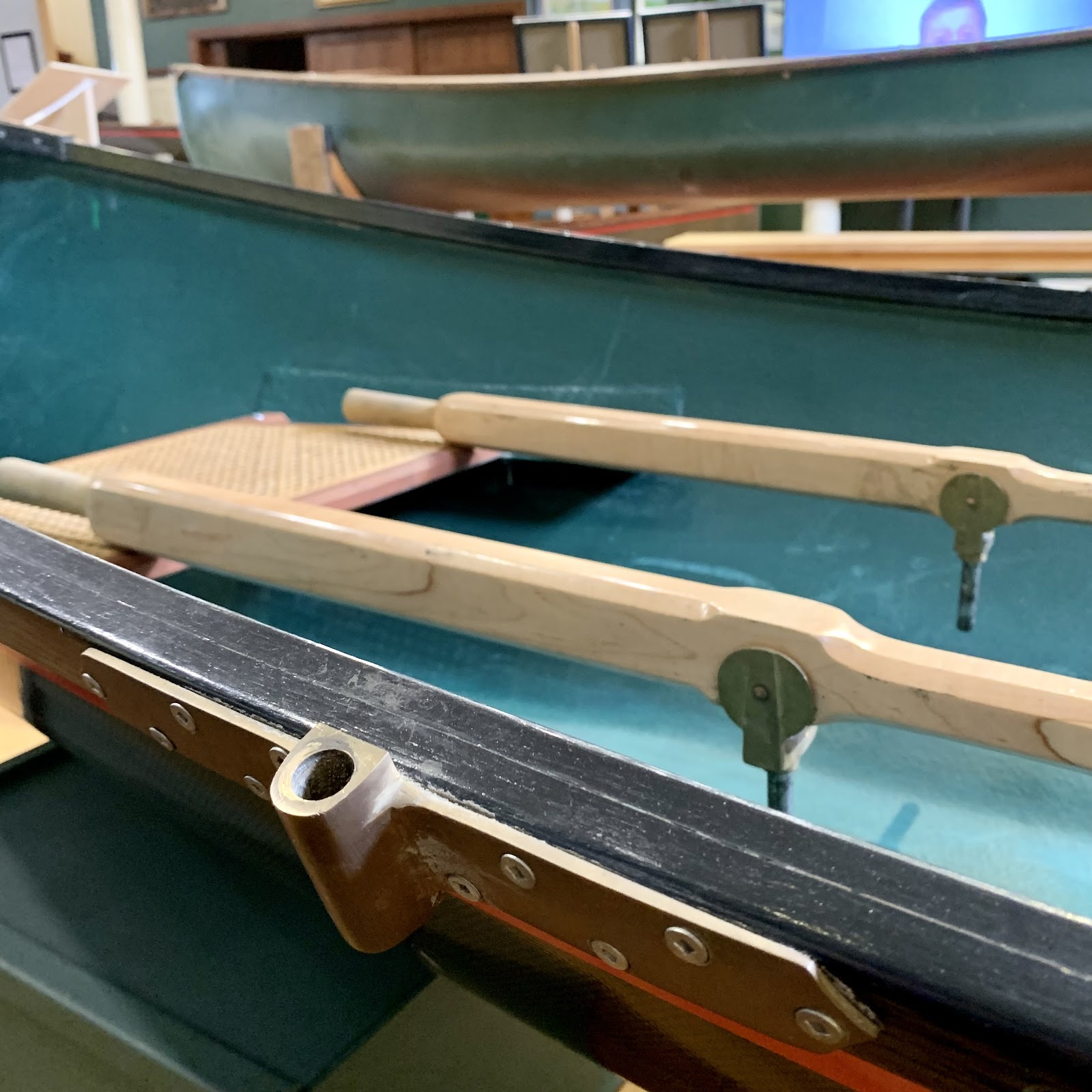 With the great popularity of his small Adirondack canoes, Peter Hornbeck experimented with building other types of regional boats in modern materials. His guideboat did not find many takers, however. Was it because people thought guideboats should be made of wood? Or was it because the guideboat itself is such a specialized craft?

The Adirondack guideboat is unique to this region. It evolved rapidly in the few decades before the Civil War as a lightweight, swift, rowing boat that could carry a big load and could itself be carried between waterways or around obstacles. Early settlers used it as their main means of transportation. It became essential to those settlers when they took up guiding city sportsmen into the woods on hunting and fishing trips. By the late nineteenth century, the classic Adirondack guideboat was from 15 to 17 feet long by about thirty-eight inches in beam, and weighed between fifty and seventy-five pounds. It was equipped with one set of oars, two sets of oarlocks, a paddle, seats, and a yoke for carrying.

This is the model that started it all. As Peter Hornbeck told Bill McKibben in 1996, he paddled a fiberglass version of Rushton's Wee Lassie about 1976 and realized it had many of the qualities he liked about kayaks but with the comfort and versatility of an open boat. He lengthened it and broadened it a bit, and arrived at what is now called The "10' Classic."

The original Wee Lassie (now on exhibit at the Adirondack Museum) was built in 1883 for William West Durant, the popularizer of the Adirondack "great camp." Durant had become enamored of the little canoes through Nessmuk's writings, and visited the shop in Canton to order a Sairy Gamp. Rushton (himself just 5 feet tall and 111 ½ pounds "when feeling well") estimated Durant's size at about six feet and 170 pounds and talked him into buying Rushton's Nessmuk model canoe, the stock model of an earlier small canoe he had built for the writer. Wee Lassie is 10 ½ X 27" and weighs 20 pounds.

Model on loan courtesy of Martha Foley Smith. When asked why she chose that boat, she replied: "Besides the pleasure of being able to poke around by myself, the fact that it's a canoe with a great pedigree of historic design, and that Hornbecks extend and  push the tradition of local boatbuilding matters a lot to me. Added value, for sure." 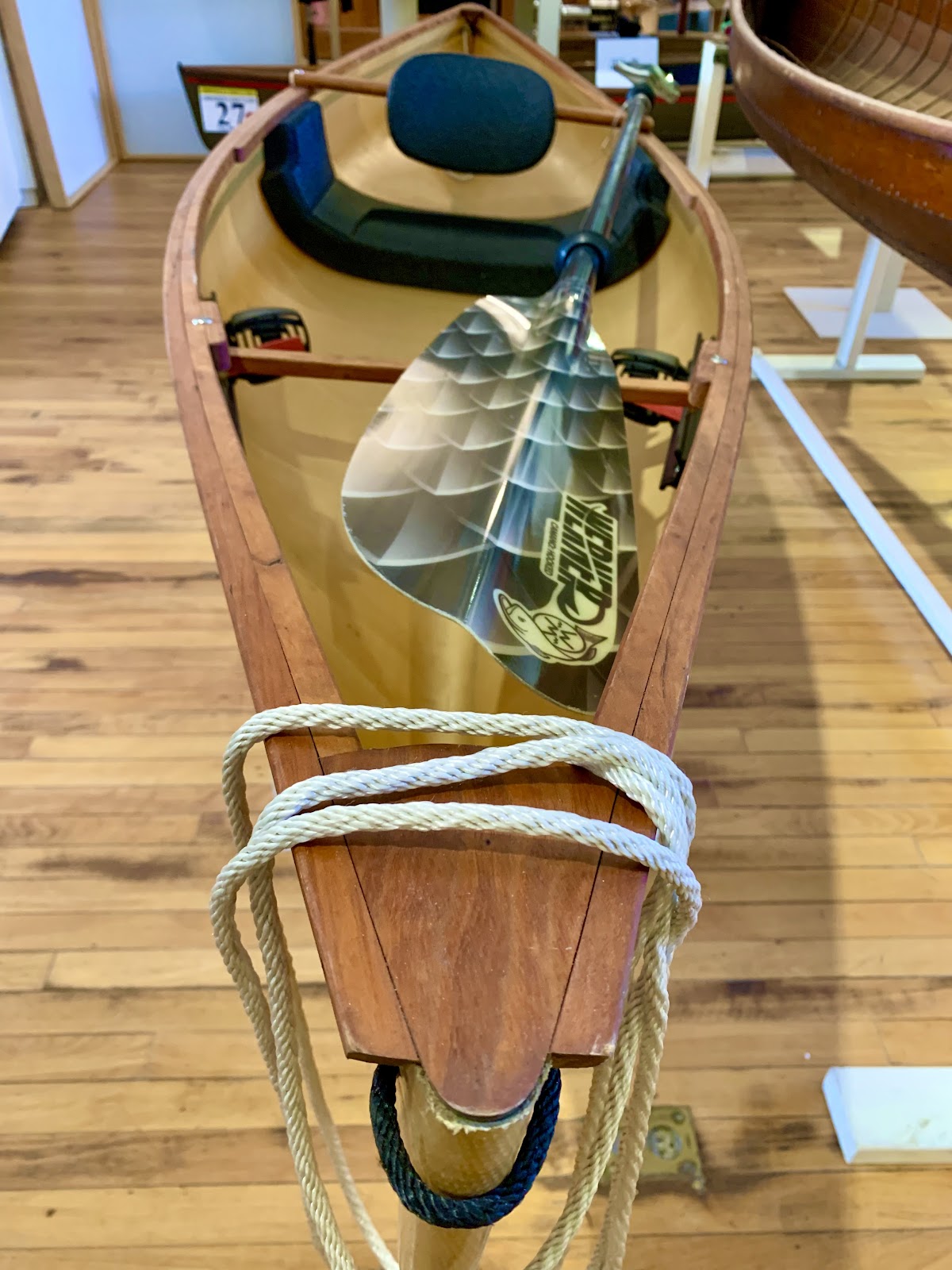 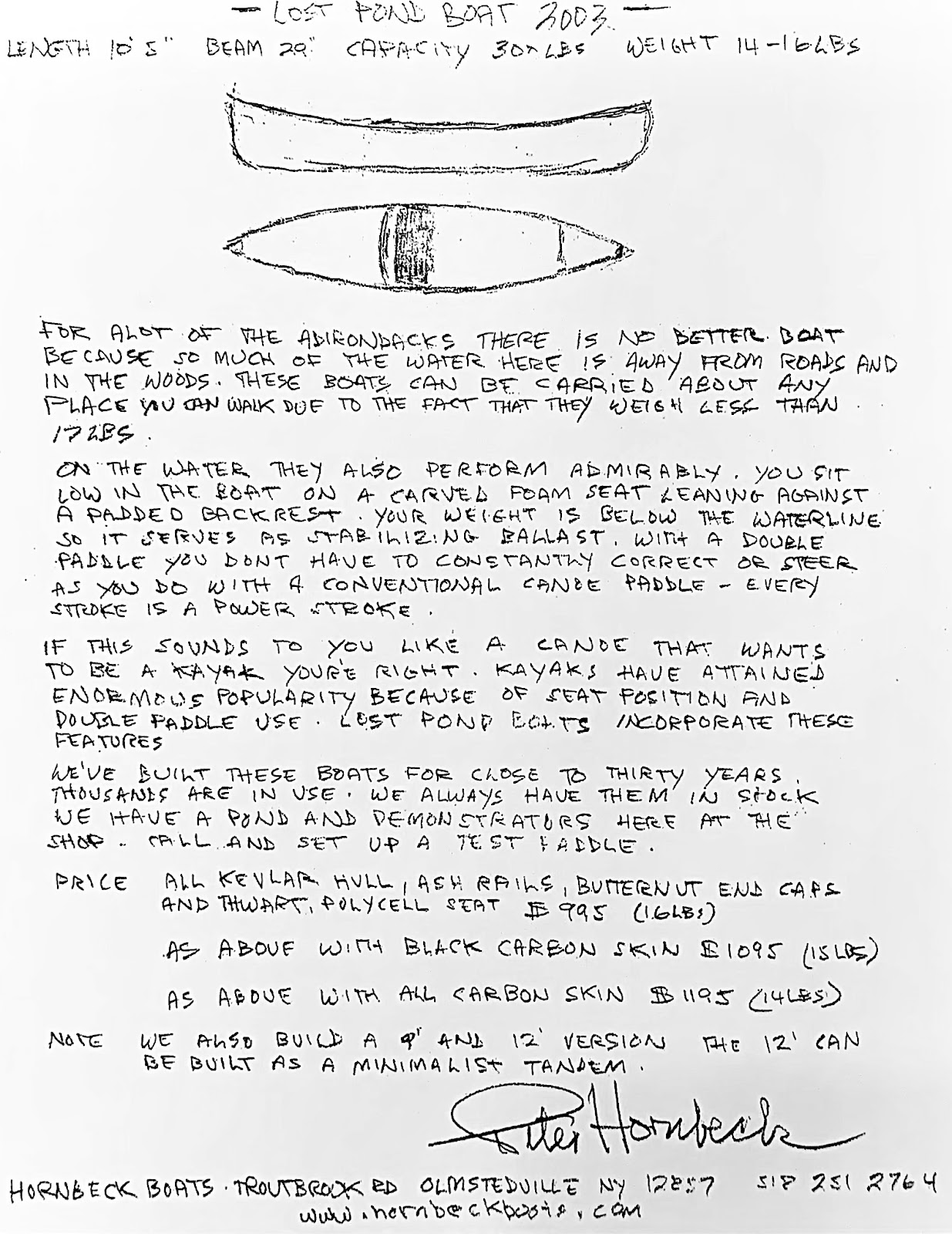 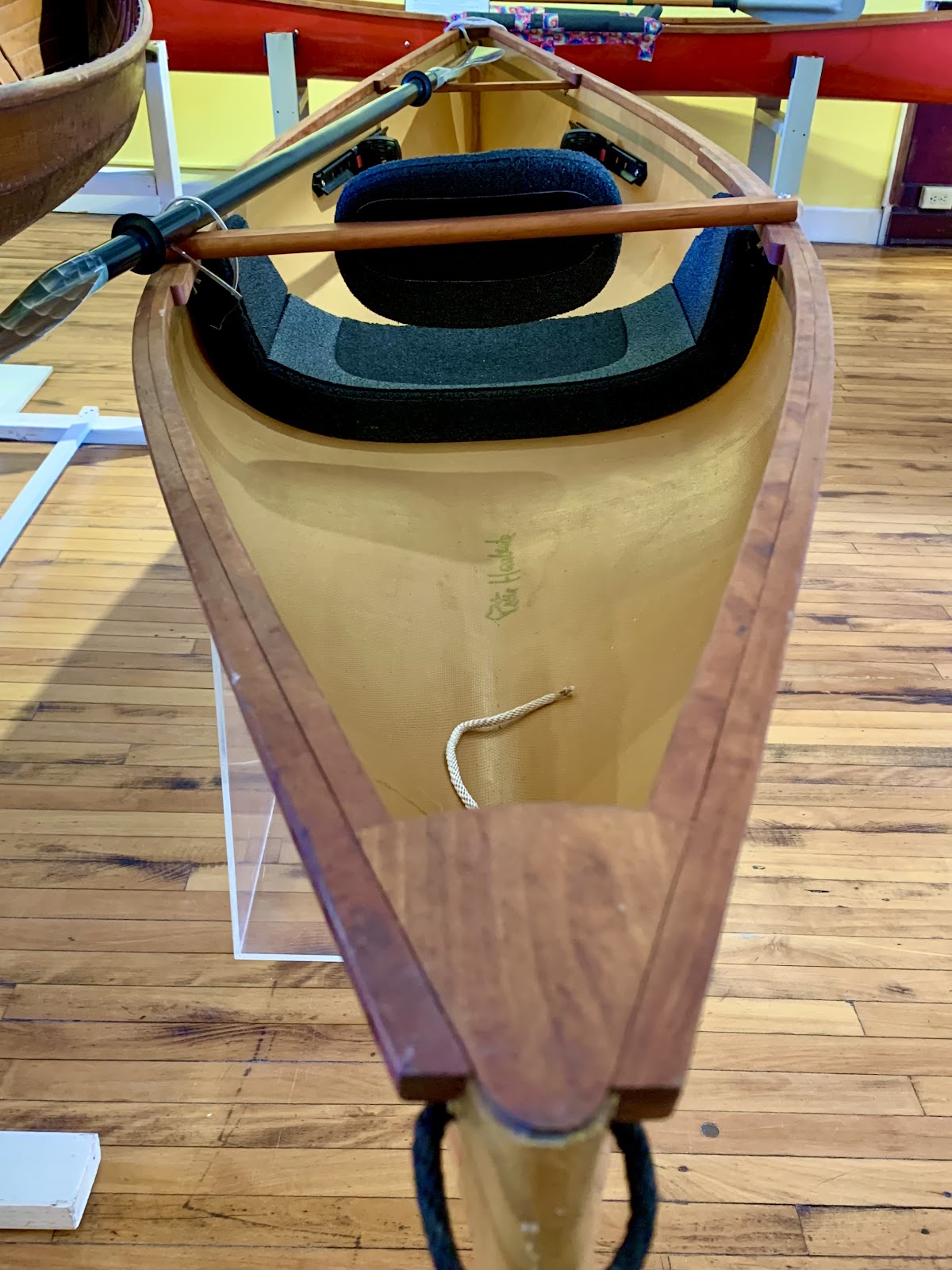 One of Peter Hornbeck's handwritten flyers for the Lost Pond Boat 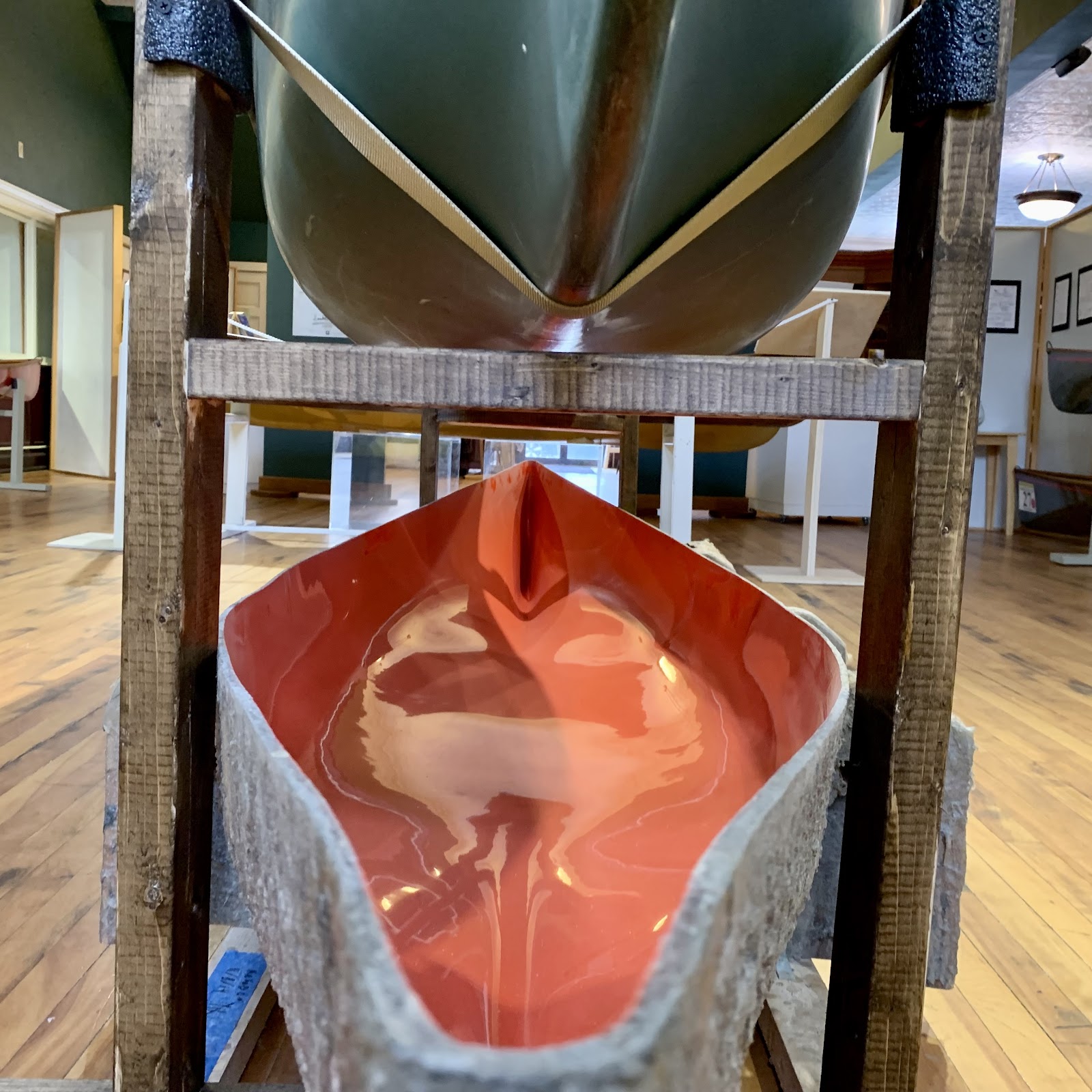 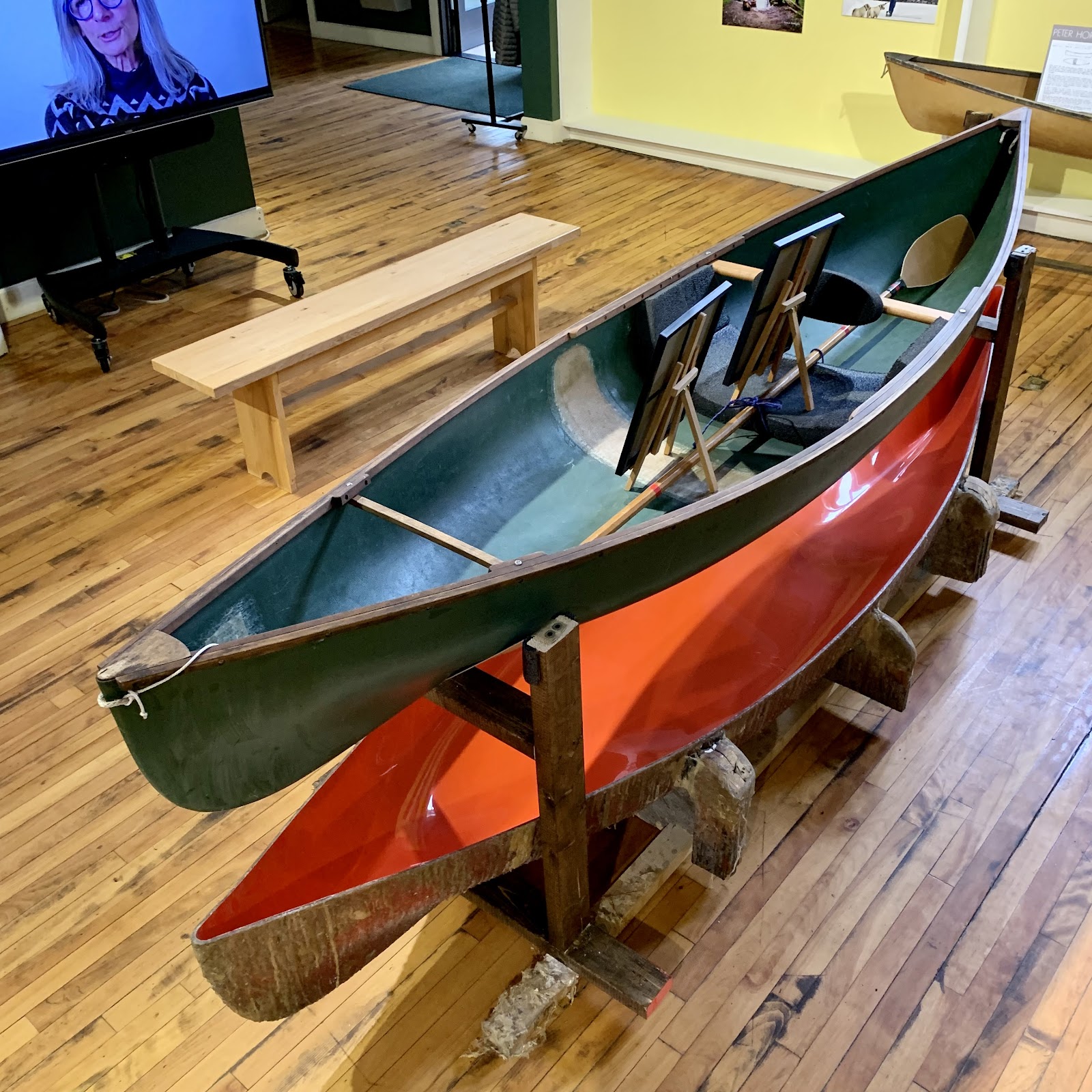 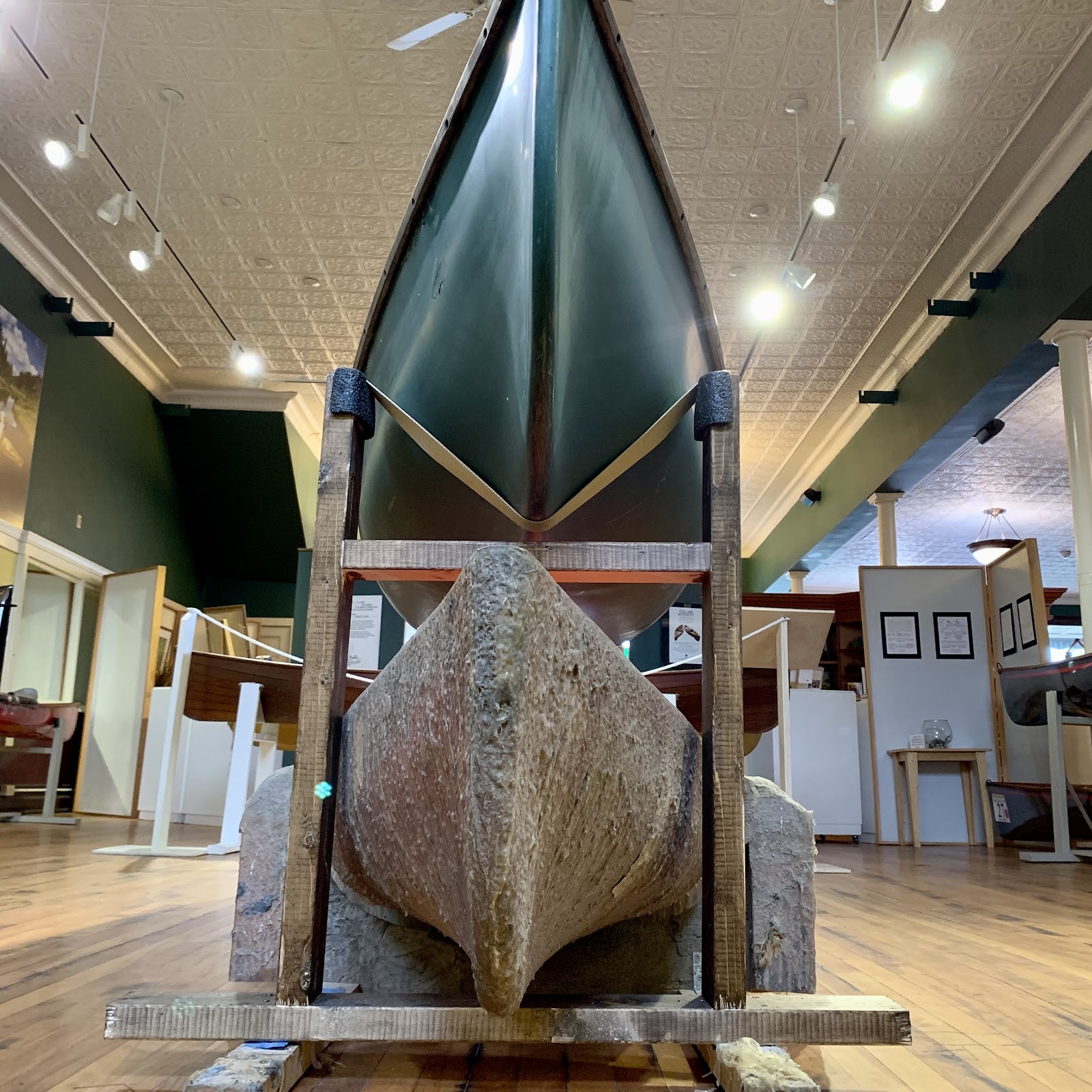 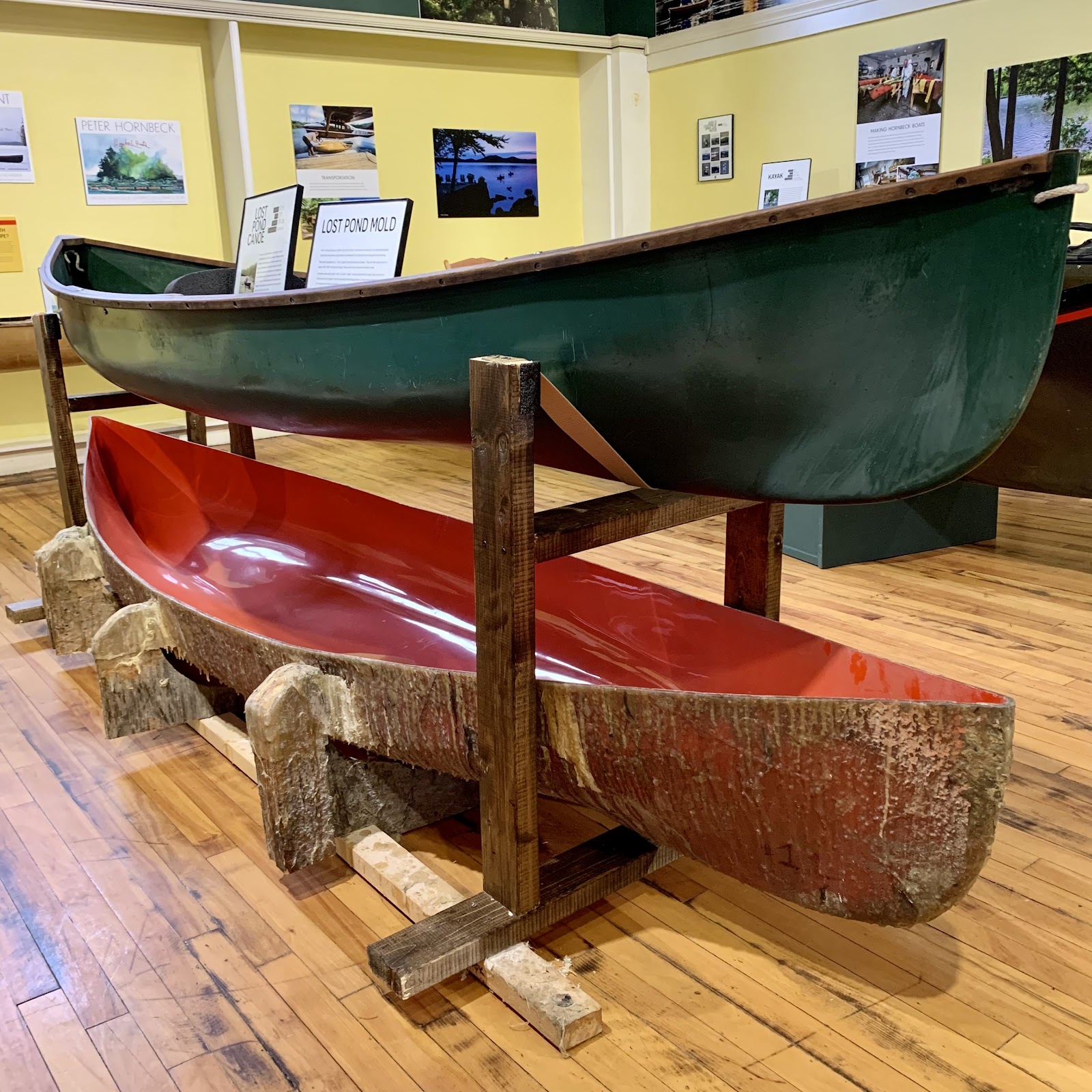 Peter Hornbeck was an artist-not only in Kevlar, but with brush and paint. He approached boat design the same way he approached a watercolor: by eye and by adjusting as he went along. Most boat designers use "lines," graphic representations of shape. They do their adjustments on paper, then "loft" the lines full-sized, tinker some more, and then create a mold.

Hornbeck was more direct. First, he built a "plug." A plug is essentially a cedar strip canoe from which the mold is made. Hornbeck would build his plug by eye, using plywood and cedar strips on a hardback to keep everything in line. Once the wooden structure of the plug was built, he covered the plug in fiberglass. He then sprayed the plug with Duratec (a resin-based material similar to gel coat), finely sanded the plug, and finished with a polishing glaze. To make the mold itself, he sprayed the plug with a tooling gel coat and built up layers using fiberglass and resin.

Hornbeck tried the first boat in the water, and then went back and reshaped the mold if he felt the boat needed changes.

The boat itself is made inside the mold, regardless of whether it is fiberglass, carbon fiber, or Kevlar. Today, the workers start by adding resin to the mold and covering the surface. Next, they place a piece of Kevlar a bit longer than the mold into it, and start rolling resin into the cloth from the middle to fully impregnate the material. The material then needs to be cut and shaped to fit into the ends of the mold in the bow & stern. Since they don't have a gel coat to cover up mistakes, this part takes some skill and artistry to make the seams look nice. They then build the hull layer by layer using different structural components, such as ribs and spines. Finally, they use one last full layer to create the inner skin of the boat. Once the resin cures, the hull is popped out of the mold, and moves into the woodshop where the gunwales are finished.

This mold dates from the early years of the boatshop and could produce a Lost Pond canoe like the one suspended above it here. 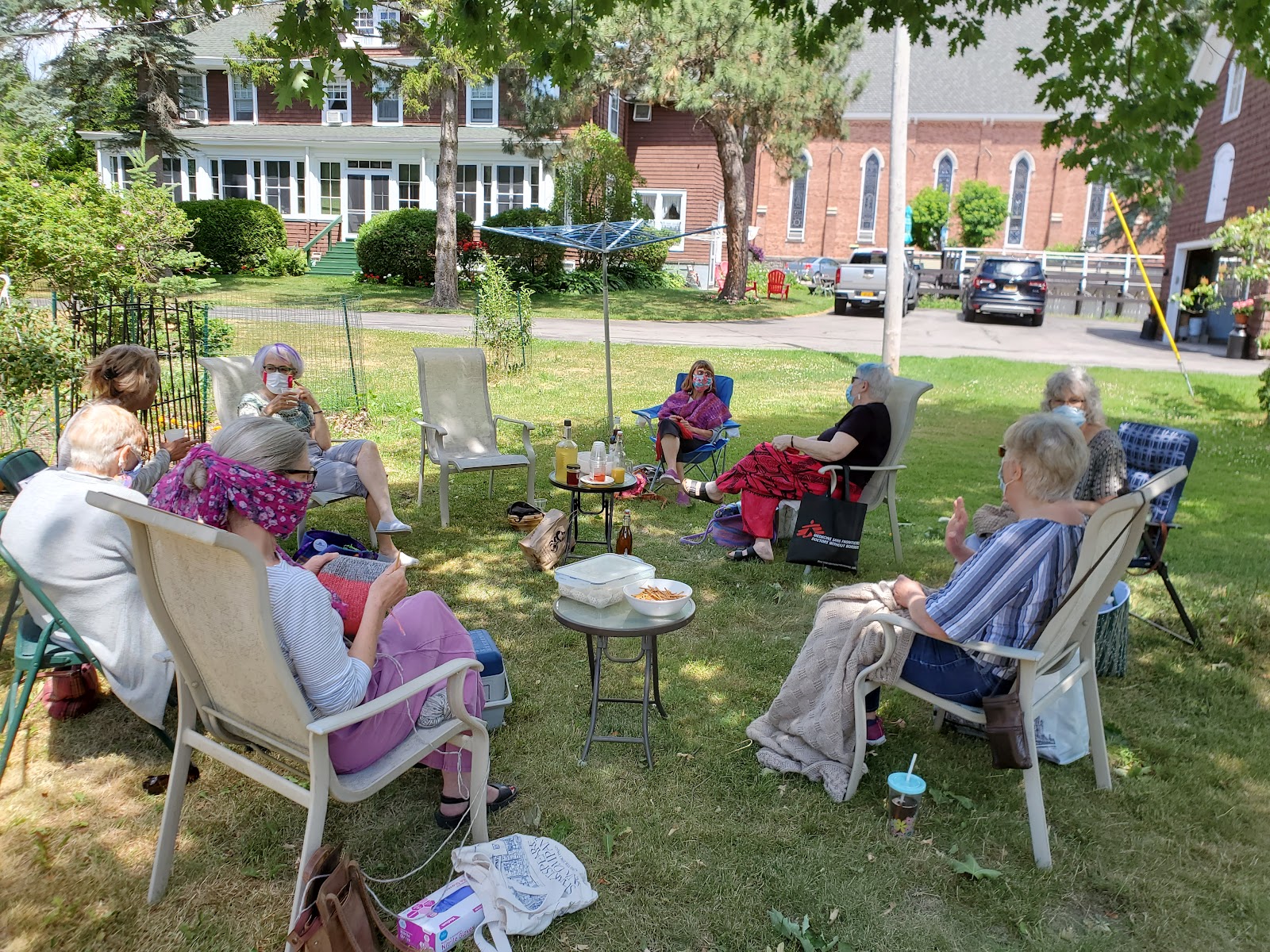