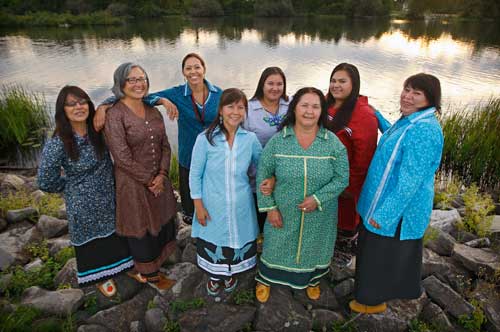 What began in the 1980s, when female members of the Swamp fam- ily first organized the Womens Singing Society of Akwesasne, has become an important cultural group for the Mohawk people. In Haudenosaunee culture, singing societies, until recently all men, are charged with the responsibility of giving assistance and support to those in the commu- nity who have suffered a loss of some sort.

A major goal of this group has been to help to keep the Mohawk language alive through song. Whether sung for traditional ceremonies in the Longhouse, for social occasions in their community and beyond, or for teaching their own children, most of the songs are written and performed in Mohawk. These wom- en believe that through their songs they honor Mother the Earth, Grandmother the Moon, grandparents from every generation, and the Great Law of Peace. With as many as 14 women and girls and a core group of 6 or 8, they per- form traditional songs and new compositions by their leader, Theresa Bear Fox. The singing is occasionally accompanied by rattles and water drums. They have produced several CDs.