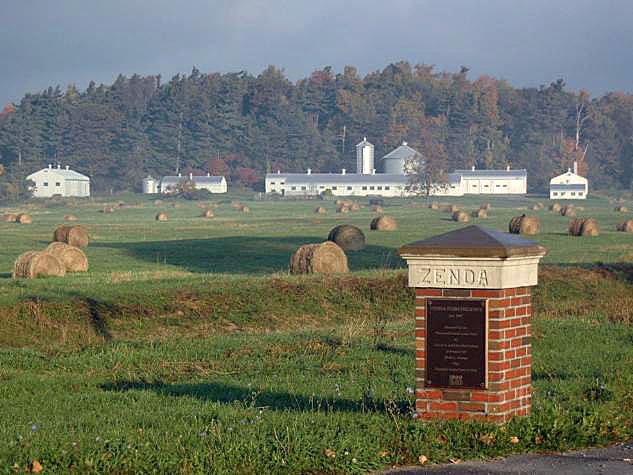 The Zenda Farm Preserve – immediately adjacent to the western border of the village of Clayton – is a 405-acre symbol of the agricultural heritage of the North Country and a community focal point for social, artistic, interpretive and recreational activities.

First established as a seasonal home by the celebrated actor James Hackett (star of a popular silent movie called The Prisoner of Zenda), it was developed as an agricultural showplace when businessman Merle Youngs of New York City acquired the land in 1936 and began development of a prize Guernsey dairy herd, later replaced by Herefords. With his commitment to state-of-the-art agriculture, Youngs had “Jamesway barns” built, notable for their high quality construction and polished steel appearance. These included the dairy barn, hay storage barn, hog pen, corn crib, turkey house and creamery.

Youngs died in 1958 but the farm operation continued on a smaller scale until 1997, when the property was donated to the Thousand Island Land Trust (TILT). Since then, TILT has renovated ten buildings, acquired additional adjacent property, and maintains it as an active community center for environmental education. TILT uses Zenda meadows and fields for an active beef farm, community garden, annual community picnic, aquatic ecology research, and children’s interpretive programs. Today, the fields are hayed by a local farmer late in the summer, allowing migrating songbirds to nest and rear their young during the spring and summer in the protective cover of the tall hay. The Lois-Jean & John MacFarlane Trail is a 1½ mile walk through the fields of Zenda Farm Preserve. The trail has information signs that describe the historical significance of the area and the farm as well as what TILT is doing to preserve this historical agricultural site.