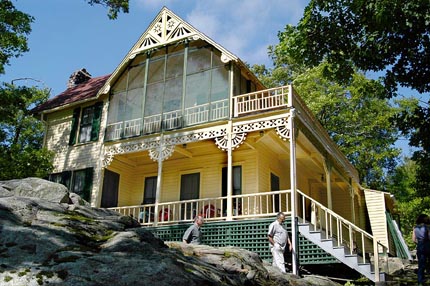 In Thousand Island Park, one of the most pristine communities in the entire North Country, you will find architecture that is at least a century old and a life style that’s about the same. Gingerbread details and Victorian colors adorn the cottages; golf carts and bicycles are the predominant means of getting around town all summer long. On a hill overlooking the village is one cottage with a very special history, where Swami Vivekananda, a follower of the Ramakrishna sect of Hinduism, spent the summer of 1895, teaching and preaching his inspired lessons. Since the 1940s, the sect has owned the cottage, now a summer retreat for Vivekananda’s successor and his followers from around the world. The second floor bedroom of the cottage where Swami Vivekananda studied and wrote is maintained as a shrine to him and a place for contemplation. A rock and tree about a quarter mile back of the cottage is the site where the original swami spoke to his followers of his divine inspirations.