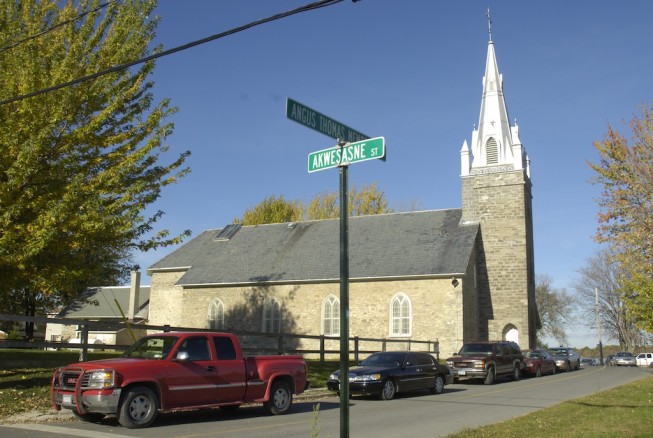 The St. Regis Catholic Church was established by French Catholic priests as a mission to the Mohawks in the 18th century. Its congregation remains vibrant today, occasionally still celebrating masses, wakes, and funerals in the Mohawk language.The Mohawk-language choir continues to sing both modern hymns and the Gregorian chants originally translated into Mohawk by French priests more than 200 years ago.

The large stone building itself, completed in 1795 with the help of Mohawk men, women, and children, is one of the oldest in the North Country. It served for many years as a landmark for sailors on the St. Lawrence, for whom it meant the approach of the dangerous Long Sault Rapids. For more than two centuries it has weathered the challenges of an extreme climate, including ice jams, flooding, and earthquakes, and in 2005 the congregation began fundraising to restore the building. The interior is adorned with Mohawk iconography, including pillars carved with the bear, wolf, and turtle—symbols of the three Mohawk clans. These pillars attest to the melding that some parishioners have achieved between their Christian faith and the Mohawk tradition, as do the purifying smudging rituals that precede each mass.