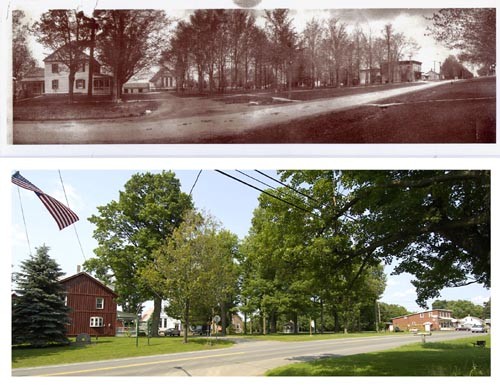 Shortly after Vermont farm families settled the town of Hopkinton in the early Nineteenth Century, the town’s founder, Roswell Hopkins, signed a deed “giving and granting a parcel of land to the inhabitants of the town for the purpose of having a village green or common.” It was a land use settlement pattern common for generations before them in New England.

Shortly after, there was a meeting house [later the Town Hall] built on the north side of the park, as well as the Congregational Church, a general store that became a residence and, most recently, the town’s museum and library. The green has been the site of many community gatherings over the years, including militia drills, political rallies, weddings, ice cream socials and, for many years, the local fire department’s annual barbecues and field days.

The big ice storm of January 1998 destroyed many of the century-old maple trees but local citizens cleaned up the debris, planted new trees and planned a big celebration for the town’s bicentennial in 2002. A gazebo and period lights were erected and a play area for children created, insuring the green’s future as a centerpiece of local social life.