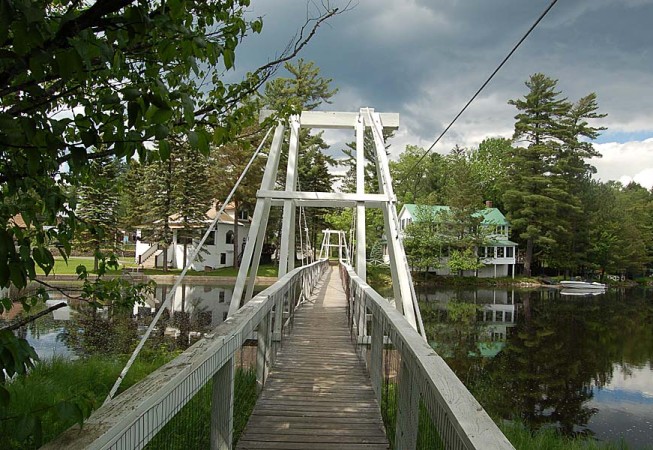 One of the longest pedestrian suspension bridges still extant in the United States, the Wanakena Footbridge is an architectural gem and a centerpiece of life for residents of this Adirondack hamlet.

Built across the Oswegatchie River in 1908 by the Rich Lumber Company to facilitate crossing between the lumber mill and mill workers’ homes, the long white bridge is located in the center of town. Soon after, the company moved to Vermont and Wanakena declined in numbers, until a revival of the community in recent decades. The old bridge has always been a landmark for locals and “summer people” alike: numerous weddings have been held on it, kids ride bikes on it and fish from it; even the deer use it to cross the river.

In 1999—a couple years after an early spring ice ham nearly destroyed it—more than 500 people wrote letters of support for a nomination to the National Register of Historic Places, recounting stories of and memories associated with the bridge. The bridge was selected later that year and a big celebration held in its honor.