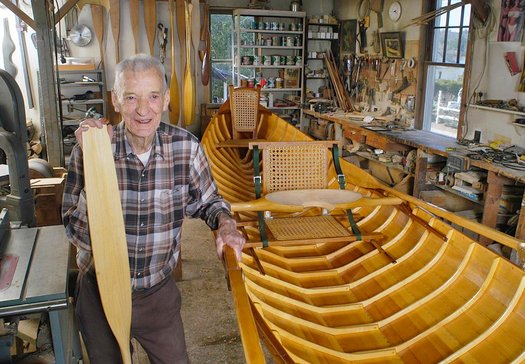 Into his 80s, Ralph Morrow was still going to his neat, naturally-lighted boat shop every day, where he repaired and built boats for Adirondack waters, as he did all of his adult life. After combat service in World War II, he began work at Crescent Bay Marina, repairing Chris-Craft, Lyman and other high quality wooden boats. At the time, old guideboats and canoes were often offered in trade for the work. When Carl Hathaway took over the legendary Willard Hanmer boat shop around 1970, Ralph worked with Carl for several years before establishing his own business. For a couple of  years, they taught a course for the local community college; several of their students are professional builders today. Since he opened his own shop, repairing and restoring old boats was his “ bread and butter,” but building guideboats was his love. He completed at least 62 of them, most of them “high-enders,” his interpretation of traditional Adirondack designs, to raise up in rough water.