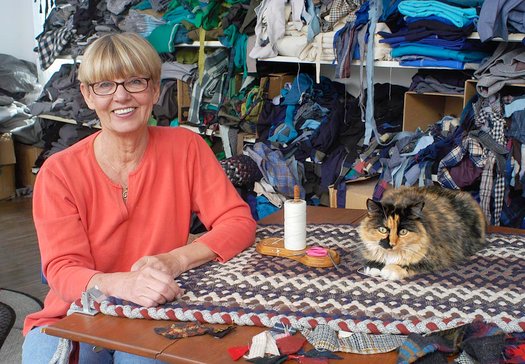 “Never use the knees!” her grandmother would caution young Helen Taylor, as the two of them cut and rolled recycled scraps of old clothes, in preparation for braiding rugs, one of the oldest of American domestic crafts. From those days on a Long Island duck farm to the spacious old Grange hall in Parishville that Helen has renovated into her home and studio, she has been designing and making rugs for nearly 50 years. By 1976, she began to create them to sell and soon employed several women to help her. Her studio’s walls are lined with shelves, organized by color and weight. Her skills for choosing and blending colors are notable. She continues today teaching a few students at a time – “anyone who wants to learn!” – and making custom rugs on commission in her studio. Some of her creations grace Adirondack great camps and Manhattan apartments today. Helen is also an accomplished writer. Her book-length manuscript, The Big Rug, follows her evolving grief as she makes a rug to mark the time during her late husband’s final months.

This feature on Helen Condon was produced in 2018 as part of a series of “Video Visits” in celebration of the 25th anniversary of TAUNY’s North Country Heritage Awards.