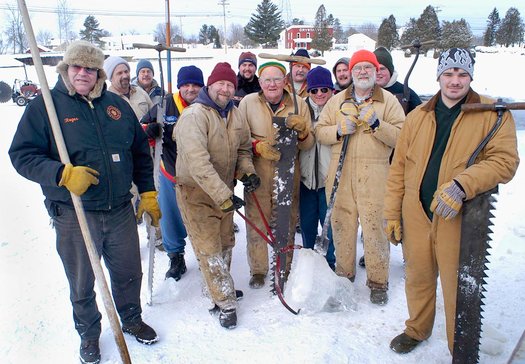 Early each February since 1964, the volunteer firemen in the hamlet of New Bremen have cleared snow off Crystal Bay and cut upwards of 1000 large blocks of ice. Each year they store it by chinking snow between the blocks and spreading sawdust between layers in the icehouse they built next to their fire station. They still use traditional hand tools–saws, spuds, poles–and a jury-rigged motorized saw and hay elevator to get the job done. Three generations of men regularly participate in the annual harvest. Only recently have they stopped using horses to haul the ice. In the summer months they sell the ice for summer festivals and picnickers. Once a traditional activity on North Country lakes and ponds, ice was still harvested on some Lewis County farms until the early 1960s. This is a true community event, as much a needed social winter break as it is a fund raiser for the firemen.  New Bremen’s is one of the last of the community ice harvests still going on, recognized as such in feature articles in the New York Times and National Geographic.