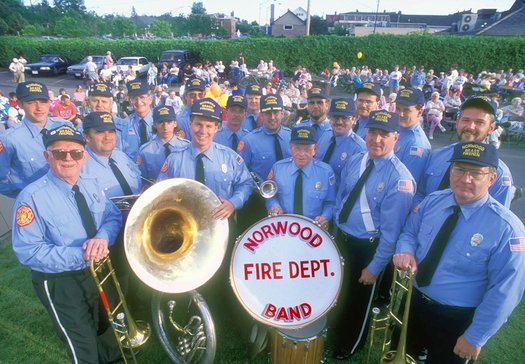 One of our region’s oldest and best-known musical organizations, the Volunteer Fire Department Band of Norwood (more familiar to many as the Norwood Brass Firemen) continues its long tradition as a community band. Dating back to the turn of the century, the band flourished until World War II. During that war, Fred Morgan, who had played the tuba in the band like his father before him, was asked by his employer ALCOA to organize a group of its workers from Norwood for a small band to help boost morale on the homefront. Varying over the years from eight to 24 members, the Norwood Brass Firemen have played at everything from local celebrations in the North Country to presidential inaugurations and the 1984 Winter Olympics in Sarajevo, Yugoslavia. Maintaining a repertoire of old standards, patriotic and jazz favorites, they often play in Dixieland style.

Click here to listen to the TAUNY/NCPR “Meet the Masters” story about the Norwood Brass Firemen.

In the video clip below, the Norwood Brass Firemen band marches as part of the opening ceremonies of the Sarajevo Winter Olympics in 1984.

Click and listen to the audio clips below to learn more about the Norwood Brass Firemen and their performances:

Manager Bob Hagget explains how much fun it is to be in the band.

Bob Hagget reminisces about changes since the band has traveled so far from home.

Band members recall the excitement of playing for the Olympics opening ceremony in Sarajevo.

The Brass Firemen play their signature song “When the Saints Go Marching In.”