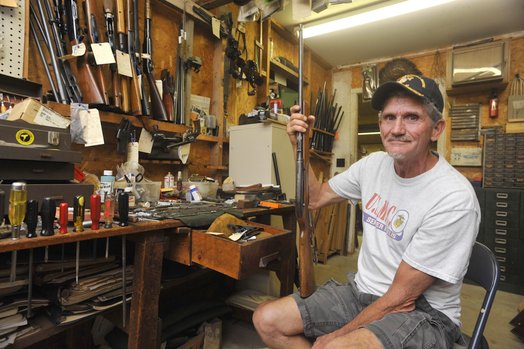 Jack Gray grew up hunting and trapping with his father Bill, to supplement the living the family made on their dairy farm. This began Jack’s lifelong passion for learning about the local woods and waterways and the creatures that inhabit them. As a boy he began helping his father assemble and repair rifles and shotguns for himself and neighbors. Shortly after his father started Gray’s Gun Shop in 1957, Jack began to work there. Now a master gunsmith, skilled in the intricate work of repairing both new and antique guns, he continues to own and operate Gray’s with his own son. They attract loyal customers from many miles around, some of whom have been regulars for 50 years. The shop has one of the largest inventories in the North Country. It is also a gathering place, where customers can often be found seated on the shop’s old wooden chairs, regaling each other with stories in and out of season.