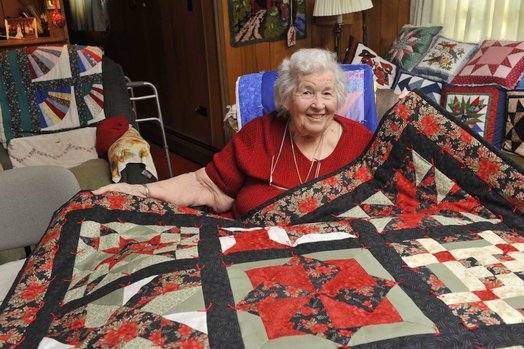 Nearly a century ago, Mildred Munson Newvine taught her young daughter Elaine to quilt at the quilting frame in the parlor of their old farmhouse. Tied quilts, also commonly called comforters, were their specialty. While both tying and quilting can be used to fasten the quilt’s three layers, tying was historically favored in the North Country, as it was faster than quilting and permitted thicker batting (interlining), the better to keep warm in winter’s cold. In the summer, neighbors would gather under the shade of a tree at Elaine’s home to tie off a quilt on the frame, inherited from her grandmother. At age 91, Elaine is now a prolific quilter with a masterful eye for color. She has given more than one hundred quilts to her large extended family and friends, as well as to those in need. She is the informal matriarch of a group of Parishville quilters who gather weekly to socialize while piecing tops and tying quilts in the traditional way.