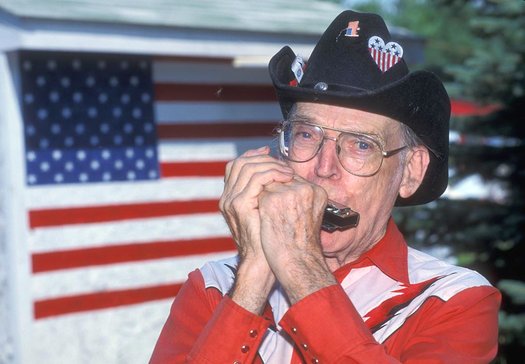 “All dolled up” in blue blazer, red and white western shirt and a faded Army veteran’s overseas cap, Fred is as much a performer on his porch steps now as he was on a USO stage 50 years ago. Fred has played the harmonica for 65 years, starting on a dare at age 10, while living in the House of Providence orphanage in Syracuse. He served in the US Army in Germany during World War II and returned to Syracuse, where he formed the Tipperary Hill Sons of the Legion Harmonica Band, made up of boys age 10 to16. After he married and had four children, he taught all of them to play harmonica. They have performed at county fairs and the state fair. Fred has lived in Black River, near Watertown, since the early 1970s and has performed frequently for many groups, especially for veterans and military gathering in Jefferson County. His repertoire includes patriotic tunes, polkas, waltzes, Broadway tunes, and other popular music.

Click here to here a “Meet the Masters” radio feature on Fred, produced by TAUNY and North Country Public Radio.