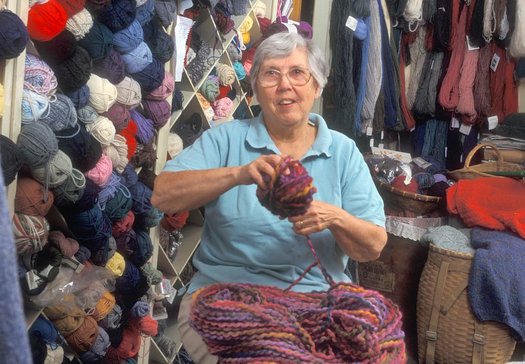 A tiny shop in two rooms of an ordinary appearing home on Church Street in Canton was not ordinary for scores of knitters around the North Country. They would say it was Mecca, Delphi, The Source. While the shop was awash in colors and had many choices of yarns and supplies, it really was the owner, Barbara Klemens, they went to see. Barb learned to knit “the Continental way” from her mother in 1935. She started running the shop in 1951, when she was first married, to around 2002. She knit every day at her shop, partly to keep familiar with yarns on the market, even when troubled with carpal tunnel syndrome. Barb has taught or coached hundreds to knit over the years. In one informal gathering of 26 local knitters, most of the knitters in the room considered Barb to have played a critical role in their knitting life. Barb is not interested in fad knitting, preferring classic functional patterns which serve families well over the generations.

Click here to listen to a “Meet the Masters” radio feature on Barb (produced by TAUNY and North Country Public Radio).