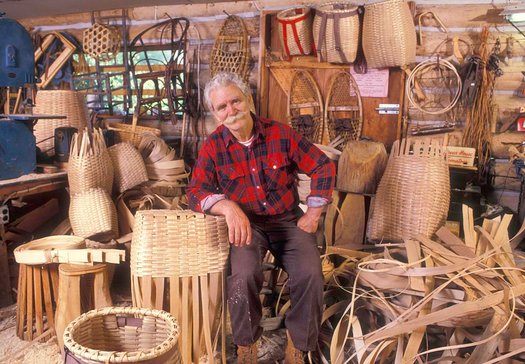 Bill Smith of Colton is widely known throughout the Adirondacks and beyond as a master of many traditional arts of the region. As a boy, Bill was fascinated by the ash splint basket making of Mohawk men who camped in the woods behind his family’s house on their way to work in the lumber woods, and years ago he took up basket making again. In recent years he has also been performing for a variety of audiences with a wide repertoire of stories and songs about local life. At home, he learned stories of woodsmen and the woods from his logger father and songs and poems from his mother. In recent years, he has concentrated on retelling traditional stories and creating new ones. He has been written about in numerous articles and books, including his own 1994 collection of stories called Tales from the Featherbed, and has produced several recordings of his stories and songs.

Click here to listen to the TAUNY/NCPR “Meet the Masters” story about William B. Smith.

In the video clip below, William B. Smith discusses the vanishing of old ways in the North Country.

In the video clip below, William B. Smith shows us Some of the fine points of weaving a pack basket.

Click and listen to the audio clips below to learn more about William B. Smith:

Bill talks about growing up in the Adirondacks.

Bill discusses growing up alone with his mother and singing.