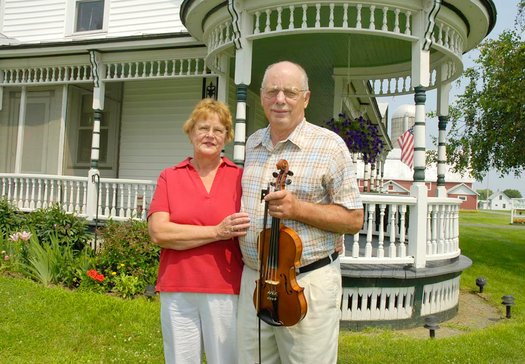 Westville, Franklin County
French American Musicians
This profile is possible thanks to an underwriting gift from the Perkins Family Fund.

Vincent and Louise Boyea are retired dairy farmers from the Quebec border community of Westville and active traditional musicians, Vincent on the fiddle and Louise on piano. From musical families, Vincent’s grandmother and father both played fiddle and he began playing when he was six. By the time he was a teenager, he “played out” at local dances, including barn dances on both sides of the border. Louise’s Danish father played fiddle at home, mostly tunes in the Franco-American tradition of Louise’s mother. Louise began piano lessons just four years ago, and now accompanies Vincent for daily practices in their dining room daily and frequent performances for fiddle flings or senior centers. All four of their children are musicians and the family occasionally gets together to play as a group. Vincent was inducted into the North American Fiddlers Hall of Fame in Osceola in the summer of 2004.