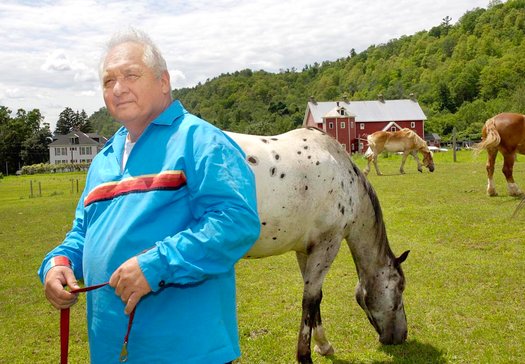 Thomas Porter (Sakokwenionkwas) is the spokesman and chief spiritual leader of the Mohawk community of Kanatsiohareke (Ga na jo ha lay gay) in Fonda, NY. Akwesasne is his home community. Tom has served the Mohawk Nation of Chiefs Council in many positions. He has been known and respected across the continent by Native and non-Native alike, since the 1960s when he co-founded the White Roots of Peace, a group of Haudenosaunee who toured from coast to coast sharing, teaching, and encouraging Native people to embrace their respective  traditions. Because he recognized that Mohawk language and culture were slowly vanishing, he assisted in establishing the Akwesasne Freedom School. He is particularly known as a master storyteller, in the best tradition of Haudenosaunee orators. He conveys messages of the utmost importance with humor and anecdotes.