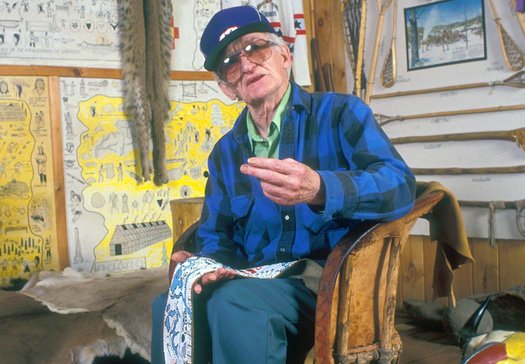 In the 1940s, while teaching school at the St. Regis Reservation at Akwesasne, Ray Fadden (Tehanetorens) began to teach young Mohawks about their own culture. With a group of young men from the reservation, he traveled to collect information about Mohawk history and trained them in woodcrafts and other traditional arts. Many of Ray’s students would become outstanding leaders of today’s Mohawk nation. He later founded the Six Nations Indian Museum in Onchiota, where an impressive collection of historical Iroquois artifacts is exhibited. Especially notable are beaded story belts, created by Fadden and used by him and his family to retell ancient myths and lesson stories to visitors. The museum aims to educate the public and serve Native Americans by reaffirming traditions. Ray Fadden has been recognized by many organizations for his energy and commitment to the Native American people and their heritage.

Click here to listen to the TAUNY/NCPR “Meet the Masters” story about Ray Fadden.

Click and listen to the audio clips below to learn more about Ray Fadden:

Ray explains how traditional headdresses have been used by Native Americans through the years.

Ray describes how he treats black bears in his backyard.

Ray recalls the Boy Scout troop he organized at Akwesasne and their experiences with prejudice.