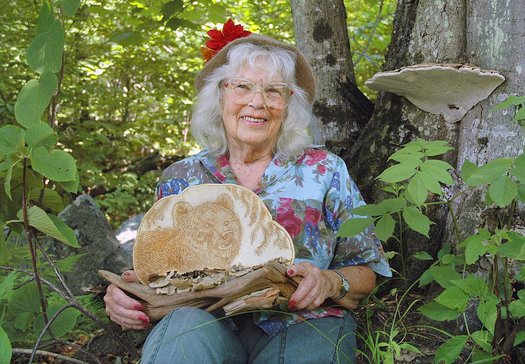 Nellie Staves was born in the Northeast Kingdom of Vermont, one of 12 children. She moved to the Adirondacks with her husband, a foreman for a lumber company near Long Lake, in 1949, and began to cook in the lumber camps for as many as 50 plus men. Always an active outdoorswoman, she maintained trap lines for years, bringing in beavers, muskrats, mink, and her favorite, red foxes. She claimed to have seen a mountain lion in the Adirondacks on two occasions, decades after the last previously known sighting. Since she was a child, she collected bracket fungi from dead or dying hardwood trees and etched beautiful pictures on them with simple tools – a protractor, a spoon, and a soft brush. She completed hundreds of them, usually with finely detailed images of wildlife. The art form is truly an Adirondack custom, since nearly every old camp has at least a couple of them, made on rainy days for or by kids.