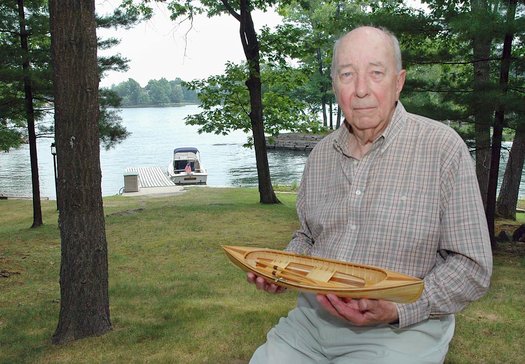 James Kincaid started coming to the Thousand Islands at 4 years old, and his family purchased a summer home on Wellesley Island. As a child, he built many models including boats, airplanes, and gliders, some of which were radio controlled. While he summered in the islands during his career as a mechanical engineer, boats – including a St. Lawrence skiff long in the family – continued to interest him. Such skiffs were long used on the river for both work and play. In 1990 he became a widower and with more time on his hands he began again to make models, this time concentrating on local boats. He completed numerous skiff models and several models of Gold Cup racing boats with radio controls. With his devotion to every detail and the precision of his techniques, some models took as long as a year to complete. A number of his models – often described as “amazing” for their authenticity and beauty – are in private collections.