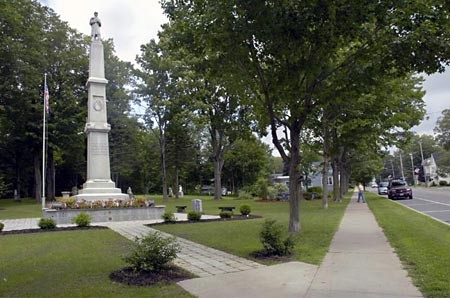 On the day after the Great Carthage Fire of 1884, the local newspaper headline declared, “Saved by a Graveyard.” That was because the village’s original burying ground served as a firebreak so the flames could be brought under control.

A couple of decades later, citizens of Carthage, like towns all over America, raised enough money to erect memorials to those who gave their lives in the Civil War. A most impressive 45 foot obelisk of Barre granite was erected in 1902. At the top stands a Union soldier in dress uniform; on its base the words: “In memory of the Soldiers and Sailors of Civil and Spanish American Wars.”

From that time to this, the small park, bordered by family monuments in the old cemetery, has been a place for quiet meditation and public ceremony. On other occasions since, local veteran(s) groups have added monuments to veterans of both world wars, the Korean War, the Vietnam War, and Operation Desert Storm. At the time of the village’s sesquicentennial, another monument to pioneer families was added. Each year, Monument Park has become the site for Memorial Day and Veterans’ Day ceremonies.

In 2005, a local citizens’ committee completed a successful fund-drive to dismantle, repair and return the old soldier to his lofty spot for generations to come.