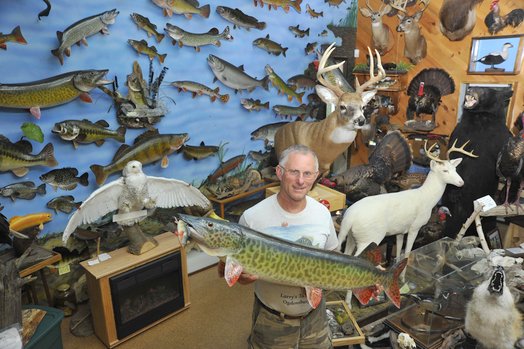 Larry Vielhauer first saw examples of taxidermy while visiting a camp in South Colton with his grandfather. He was fascinated and remembers thinking, “I can make them look more realistic than that.” Shortly after this, Larry signed up for a correspondence course in taxidermy with a school advertising in Field & Stream magazine. That was the start of a life-long commitment to creating natural-looking trophy mounts for hunters and fisherman who eat their catch and preserve the skin as a memory of the outing. Larry considers himself part scientist, part surgeon in his efforts to showcase the wonders of the natural world. While he works with all kinds of animals, he is known for his mastery of St. Lawrence River fish, particularly the muskie. Keen to pass his skills on, Larry hosts students from all over the country for workshops and internships.

This feature on Lawrence Vielhauer was produced in 2018 as part of a series of “Video Visits” in celebration of the 25th anniversary of TAUNY’s North Country Heritage Awards.