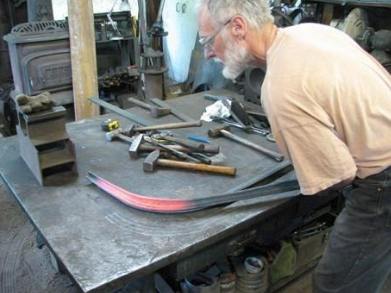 John Scarlett took his first blacksmithing class in his late thirties and, at the time of receiving this award in 2015, was celebrating his 30th year as sole proprietor of Little Tree Forge at age 70. In recent years, he’d continued steadily to design and hammer out one-of-a-kind ironwork commissioned by clients living mostly within 50 miles of his shop in Rossie.

He began by forging high quality American colonial reproductions for such places as Colonial Williamsburg, and for twenty years demonstrated preindustrial blacksmithing techniques at the Adirondack Museum.

His reputation in recent years came primarily from his creation of meticulously crafted fireplace accessories designed to reflect the flora, fauna, and architecture of each site. He got great enjoyment from teaching beginners and finding ways to educate the public about the beauty and characteristics of fire-softened, hammer-worked iron.
(Updated 2020)