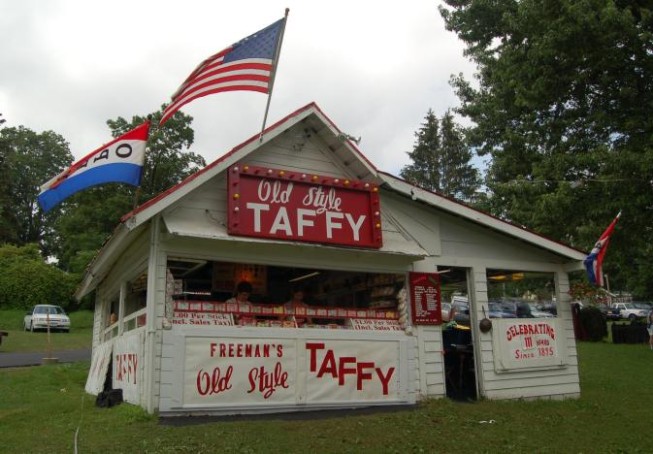 Just inside the gate of the nearly 200-year-old Lewis County Fair, Freeman’s Old Style Taffy Stand is a tradition within a tradition. Itself well over one hundred years old, the stand is still operated during the fair by the Freeman family, and the white clapboard hut occupies the same spot that it did when it first opened in 1895. At that time, it was in the hub of the fairground; with the fair’s growth the main attractions have moved farther out.

The taffy stand, however, remains, and customers who remember buying taffy at the fair as children forgo owner Jim Freeman’s second midway location for the stand they remember, a little removed from the noise and bustle of the fair. Jim Freeman began working at Freeman’s taffy in 1952, the year his father and grandfather took over the stand from relatives. At the age of five, his job was to tote water to the stand from the spigot in the 4-H Club building, but he soon learned to clean and then handle the marble slabs essential to taffy making.

Today he still makes more than twenty flavors of taffy according to the original recipe, and carries on the tradition of giving a piece of taffy to any child who comes to the stand.