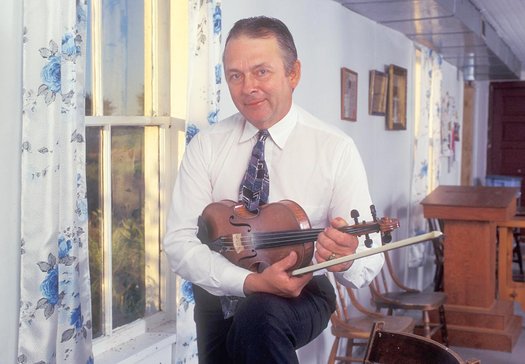 The first tune 14-year-old Don Woodcock played on the fiddle was his father Howard’s version of ‟Road to Boston.”  All these years later, Don now holds the title of Grand Champion Fiddler of New York State, having won the state championship contest three times. By 1987 he was inducted into the New York State Fiddlers Hall of Fame in Osceola. His peers say Don Woodcock’s playing is technically superb and he is widely recognized for having one of the greatest repertoires of traditional fiddle tunes anywhere around. Don has played at many shows and exhibitions in Northern New York, Vermont, and eastern Ontario. In recent years, Don has performed with pianist Myriam Gagner and drummer Rhonda Roethel, a combination found commonly at house dances and local dance halls of his father’s generation. Don has also recorded an album of traditional St. Lawrence River valley fiddle tunes.

Click here to listen to the TAUNY/NCPR “Meet the Masters” story about Donald Woodcock.

Click and listen to the audio clips below to learn more about Donald Woodcock and his music:

Don describes the first local fiddling contest in Russel in the early 1970s.

How Don taught himself many of the techniques of fiddling he still uses.

A medley of “Portland Fancy” and “Road to Boston”, tunes Don learned from his father.