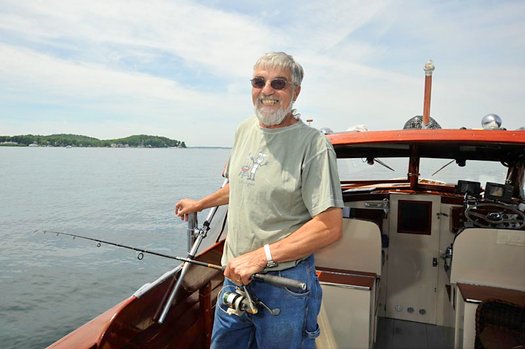 Since the mid-1960s, Clay Ferguson has taken fishing parties out on the St. Lawrence River for a day’s catch of perch, bass, pike, walleye or that elusive favorite, the muskellunge. His successful hunting has earned him the same nickname that his father, who guided for 30 years, also bore: “Muskie Ferg.” Now considered one of the last of the old-time guides, Clay fondly recalls the old-timers of his youth from whom he learned so much about caring for boats, navigating the river, and entertaining passengers with jokes and stories. Where other guides have moved on to fiberglass boats, Clay continues to lovingly maintain and operate the classic mahogany 1951 Chris-Craft he bought when he was 21. Clay is famous for his shore dinners, a tradition since the beginning of guiding in the Thousand Islands, and has been featured in publications such as Field and Stream, National Geographic, and Saveur.