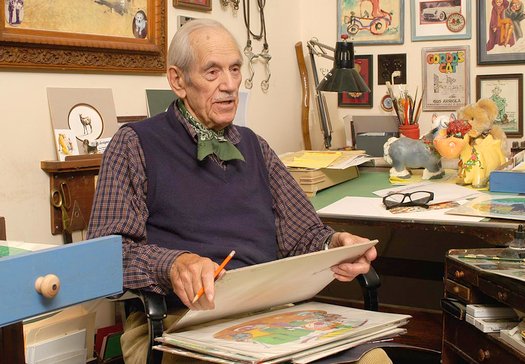 Arto Monaco was born in Elizabethtown, the son of an entrepeneurial Italian immigrant who bought a general store, expanded it with a garage and automobile showroom, and soon after opened one of the first Italian restaurants in the North Country. Arto left the Adirondacks as a young man to go to art school and later went to Hollywood to design sets for films; he also designed and invented toys for several major toy companies. In the 1940s he returned to Upper Jay and soon found himself designing, constructing and decorating the buildings for Santa’s Workshop in Wilmington, claimed by some to be the first theme park in the nation. From there he went on to help develop Old McDonald’s Farm near Lake Placid and to design and build his own Land of Make Believe, on the site of his father’s restaurant. Throughout his life, he worked with toys and children’s entertainment.