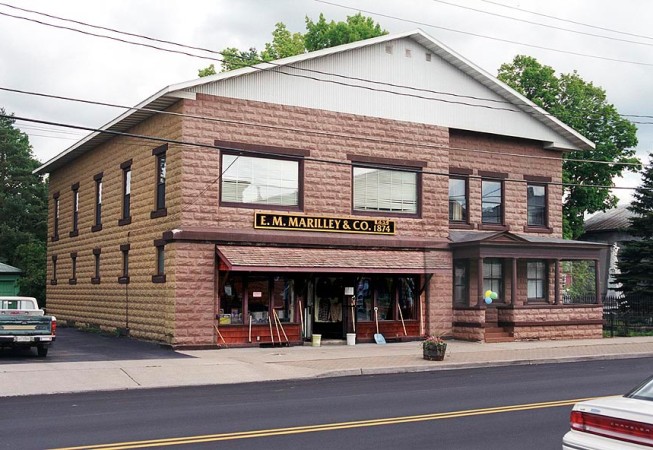 You take a giant step into the past when you enter Marilley’s store, going past the plate glass windows with displays of cast iron cookware or gardening tools into a large open space that is filled floor to ceiling with merchandise. Around you is the original oak store furniture–shelves and counters and bins that once held bulk spices or seeds and are now filled with plastic bags of goods from all parts of the world.

Where else in the North Country can you still buy extra sharp cheddar cheese fresh cut from large blocks [if you show any interest at all, you will be offered a sliver to taste] or Wilbur’s milk chocolate in ten-pound bars? Now owned by Jim Marilley, the founder’s grandson and himself in his late seventies, the store has changed little since it was rebuilt after a tragic village fire in the early twentieth century. You cannot leave without a trip to the second floor, where lamp chimneys, hunters’ woolens, and fancy Christmas decorations of various vintages share cramped shelves. Sometimes the prices are original too and Jim will bargain with you if you want.