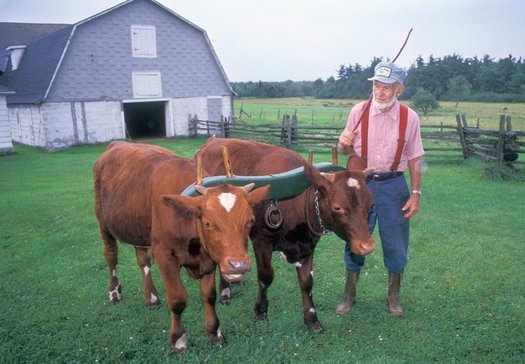 Kermit Saxton kept oxen just as his grandfather and great grandfather did on their small farm in Franklin County. He spent his entire life on the Saxton Homestead, where his great-great-grandfather, with the aid of oxen, broke the land in 1835. “I fell in love with the star on their forehead,” Kermit said, as he remembered his grandfather’s pair from his childhood. In 1959, Kermit got his own first pair of Devons, the dark red variety native to Devonshire, England. In the years that followed, he trained and worked several pair, or ‟yoke.”  Kermit gave his oxen regular exercise around his farm by hauling stove wood and pulling stumps. He demonstrated traditional driving and working skills at local festivals and field days. Saxton was also a storyteller, who recited poetry and told stage jokes, in the tradition of community entertainments.