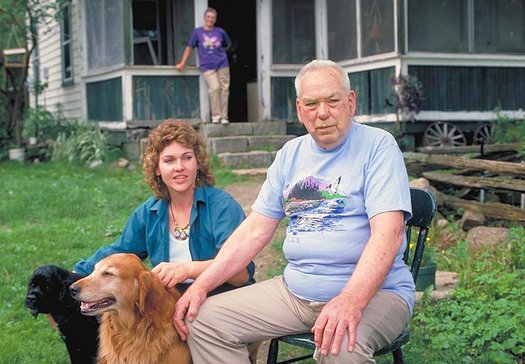 Robert James (Jim) Cleveland and his daughter Colleen of Brant Lake are descendants of Scottish and Irish settlers to their area. Their family’s music and stories from the old country included ancient ballads or story-songs, for which the Scots are known. Sara Cleveland, Jim’s mother, and Colleen’s grandmother was a nationally-famous ballad singer of her generation. After Sara’s death in 1987, Jim and Colleen began singing the family songs in public. In addition to about 400 songs of the British isles, the family repertoire includes songs from a variety of other popular sources. Jim, a former woodsman and construction worker, learned many cowboy and outlaw songs from his mother and his uncle. Like their traditional counterparts in Scotland and Ireland, Jim and Colleen usually sand unaccompanied. Some of the family’s very old ballads have not been collected from any other North American source.

Click here to listen to the TAUNY/NCPR “Meet the Masters” story about Jim & Colleen Cleveland.

Click and listen to the audio below to learn more about Jim and Colleen Cleveland:

How Colleen learned the alphabet from an old woodsmen’s song.

Colleen on how singing has always been a part of life at home.

Colleen sings “The Last Farewell,” with references to Adirondack towns.