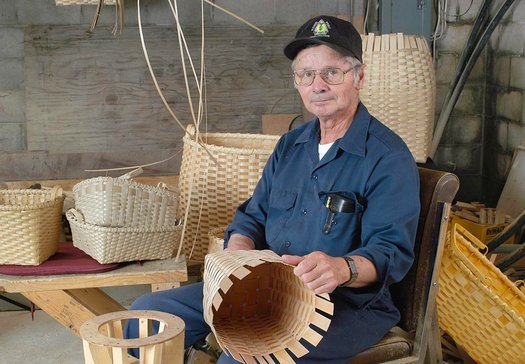 Henry Arquette is one of a very few Mohawks who continue to make utilitarian baskets of hand-pounded black ash splints and is considered by many at Akwesasne to be the best. An ironworker who spent much of his adult life working in construction of bridges and skyscrapers in eastern cities, Henry learned to make baskets from his father, who encouraged him to keep the tradition alive. Once he retired, he took up making baskets as a hobby and soon was in demand as a teacher of others at the reservation. Dozens have taken his classes over the years. His baskets are known for their strength and durability. While the “Akwesasne Basket Makers” were recognized by TAUNY in 1994, they represent the long Mohawk tradition of sweetgrass “fancy baskets,” practiced mostly by women and sold for souvenir or decorative purposes. Much older basket forms, like those made by Henry, have long served various functions as work baskets– pack baskets, market baskets, corn washers, picnic baskets, and more.