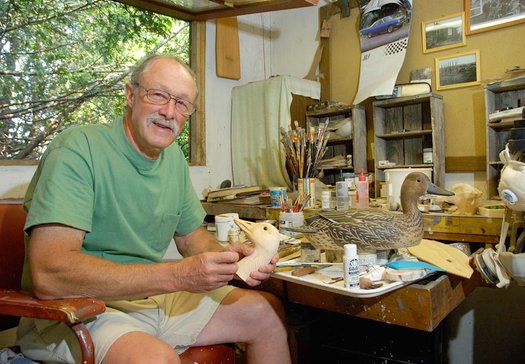 An avid fisherman, trapper and hunter from Heuvelton, Don Morley started carving duck decoys in 1975, using pieces of packing crates from his workplace to make small birds. After a visit to the annual decoy show in Clayton, Don decided to get serious about carving and in 1977 he took approximately 75 birds to Clayton to sell. Two years later, he quit his day job to carve full time, eventually sending his work all over the country. Keeping a few study ducks in his backyard led Don to start a business raising exotic birds. In carving, though, Don has stuck mostly to North Country waterfowl. He’s especially fond of black ducks and female mallards, which can take up to three days to paint. “I’ve taken three best-in-show with females. To me, they are a lot prettier than a drake.” In addition to winning many ribbons in regional and international competitions, he has often served as a judge. Rejecting the current interest in overly-realistic wildfowl art, Don prefers  traditionally simple painted birds.