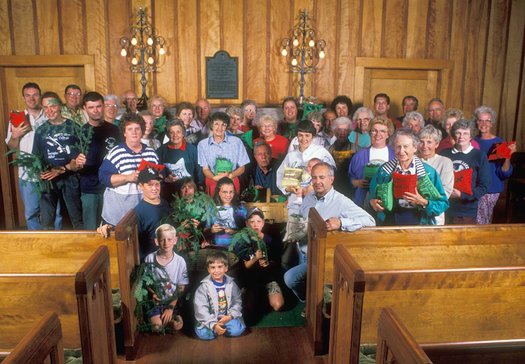 As long as 100 years ago, balsam products were marketed in the Adirondacks to tourists who wanted to take a reminder of their vacation experience home with them. At that time, churches began to hold work bees to make souvenir balsam pillows to sell as fund-raisers. This Adirondack tradition is still alive in Big Moose Lake. The Big Moose Community Chapel began holding balsam bees in the 1930s and they continue to do so today. The pillows are still produced mostly the way they have been for over 60 years: the men collect and shred the balsam which is then stuffed into the covers which have been individually cut and sewn by the women. The balsam pillows are then sold to raise operating funds for the church at their annual bazaar in August. Besides being a source of revenue, the two bees each year are an opportunity for members and friends to work together and socialize.

Click here to listen to the TAUNY/NCPR “Meet the Masters” story about the Big Moose Community Chapel.

This feature on the Big Moose Community Chapel Balsam Bee was produced in 2018 as part of a series of “Video Visits” in celebration of the 25th anniversary of TAUNY’s North Country Heritage Awards.

Click and listen to the audio clips below to learn more about Big Moose Community Chapel:

Volunteers explain how they grind fresh cedar boughs at the annual balsam bee.