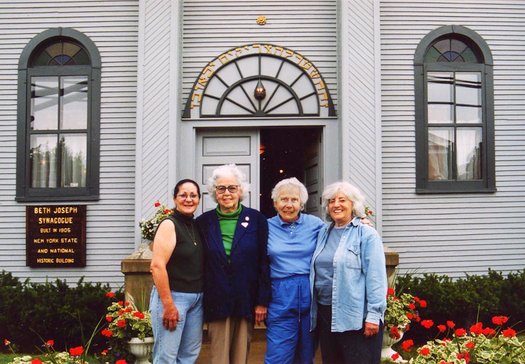 Historic Beth Joseph Synagogue is known as “The Peddlers’ Synagogue,” because its founding members were immigrant Jewish men who made their living peddling housewares and fabrics to the rural homes of the Adirondacks. The first Jewish congregation formed in Tupper Lake in the 1880s and met for services in members’ homes. In 1905 the congregation dedicated the synagogue and thrived into the 1920s, when it served 35 families, its greatest size ever. In the 1980s, a dedicated and persistent group of local women, some descendants of founding Jewish families, began raising the funds and overseeing the work to complete a restoration of everything from the fir wainscoting and original light fixtures to the elaborately embroidered  perokhet or ark curtain. Since then, the synagogue has become active again, with services in summer months and occasional weddings or bar mitzvahs.

Click here to listen to the TAUNY/NCPR “Meet the Masters” story about the Beth Joseph temple.