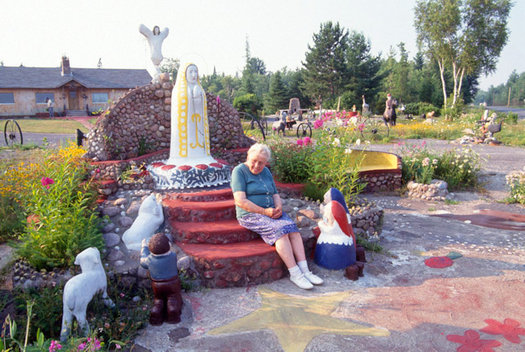 In her work of over 40 years, Veronica Terrillion created a remarkable thing, a total environment of sculpture on her three-acre homestead in Lewis County. When she bought the land in 1952, her first project was to construct a log house. Next, she dredged a pond and eventually added two islands. Most notable to travelers of Route 812, she began filling her yard with large concrete sculptures which she creates herself. She made her first sculpture in 1954, a statue of the Virgin Mary, and placed it by the roadside. After that, she added numerous animals (like a zebra and Adirondack whitetail deer), religious images (a nativity scene and St. Francis of Assisi), and representations of her family members. In all, there are over 400 figures. Toward the end of her life, she painted oil paintings based on memories of her childhood and family. Veronica attributed her accomplishments as an artist to her faith and ‟her God-given abilities.”

In the video clip below, Veronica shows us sculptures in her garden and explains how she created them.

Click and listen to the audio clips below to learn more about Veronica Terrillion:

Veronica explains the process she uses to create her sculptures.