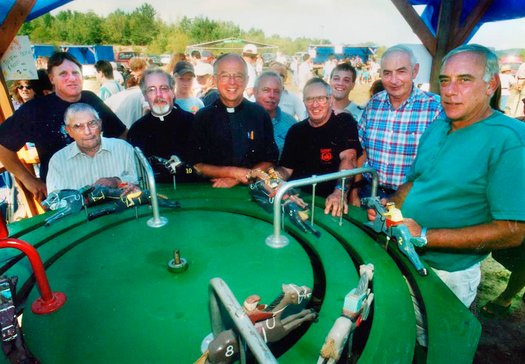 Redford, Clinton County
Annual Celebration of the Feast of the Assumption

The Redford Picnic, sponsored by The Church of the Assumption in Redford, has occurred every year since 1855, when the new church was dedicated. Often referred to locally as “the Fifteenth of Redford,” the event has always been a popular combination of a celebratory Mass, a variety of games and contests, and, of course, plenty of food. Scores of volunteers each year prepare the picnic meal and manage the various booths, like an antique horse race game, a pie booth that’s also a game of chance, and a large “fancy booth” of needlework. Rides on a rare 1890s-era Armitage-Herschell carousel are the highlight for many who attend. Left for the church by a bankrupt traveling show around 1910, the carousel, with its original carved horses and chariots, is now operated only on the day of the picnic each year. What began as a local feast for this small French American parish has in recent years attracted several thousand people each August.