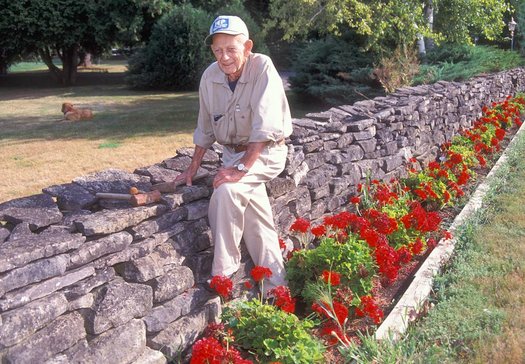 For 30 years Erwin Quigley built impressive stone walls along the streets and roadsides of northwestern St. Lawrence County. A master of the ancient art of dry stone wall construction, Erwin began the work when a customer for whom he did yard work asked him to try to build a wall for him. After a 20-year career in the United States Army, this native of Madrid  returned to the North Country. After his return, he built dozens of walls, using native sandstone and fieldstone from nearby quarries. He was essentially self taught. With a few simple tools used by craftsmen for centuries, he designed and painstakingly created masterpieces, sometimes as long as 300 feet, that are distinctive and enduring. A recent road construction project on Route 37, the highway between Ogdensburg and Morristown, focused attention on stone walls that have been removed and often relocated. Many of them are the work of this man.