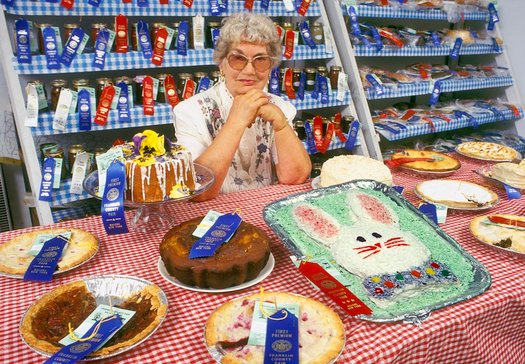 Bea Reynolds of Burke was well known to her family, church, and community as a special homemaker. For years, while raising her family, she also contributed to church suppers and bake sales at her local Methodist Church. From a big family, she learned early from her mother.  While her husband Eric showed cows and raced harness horses at the Franklin County Fair in Malone, Bea began in 1985 to enter breads, doughnuts, rolls, cookies, cakes, canned vegetables, fruit, and pickles, and one each in all nine categories of pies. She came away from the Grand Champion Cook, having received the most blue ribbons. Each year that followed, she entered as many as 100 classes and received upwards of 40 blue ribbons. While she also entered flowers and needlework, Bea’s cooking — especially her lemon meringue pies, carrot cakes, and raised doughnuts — were her specialties.

Click here to listen to the TAUNY/NCPR “Meet the Masters” story about Bea Reynolds.

Click and listen to the audio clips below to learn more about Bea Reynolds:

Bea remembers the first apple pie she entered at the Franklin County Fair.

How Bea carefully selects items to enter in the fair for competitions.

How Bea’s mother made quilts at home many years ago.